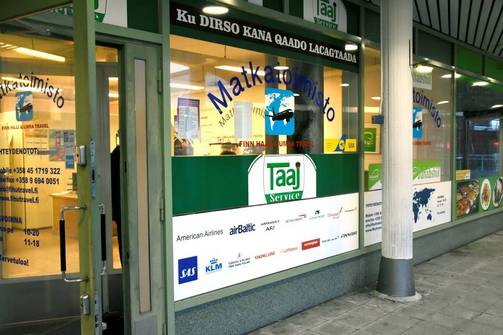 Located in Helsinki the Puotinharju Finn Hajj & Umra Travel travel agency has since the end of November been bustling. Recently, Iraqi asylum seekers have been the largest customers for the company. (SAMI KOSKI)

According to a Helsinki-based agency the majority of customers have been Iraqis asylum seekers. Some of them even want  to leave Finland on the same day.

Christmas is already knocking around the corner, but the Helsinki Puotinharju travel agency located in a shopping center has not taken  notice.

The door at the small agency opens at a swift pace. First, an Iraqi man in his fifties and just over a twenty-something Iraq man arrives at the scene.

It shows also the reason for opening the door to a travel agency in Helsinki. Men have come to the scene, because they want out of Finland.

They have been brought to the Finnair Hajj & Umra travel agency situated in the Helsinki Puotinharju shopping mall for the fact that services are also available in Arabic.

Finns gained knowledge of the travel agency, after the Helsinki Uutiset and Vantaa Sanomat reported on it, which at present, the largest part of the travel agent’s customers are Iraqi asylum seekers wishing to leave Finland. In a month, a travel agent sells about 50 trips.

– I have not been on the spot every day, but in a day it can go up to fifty. Who will actually buy a ticket depends on the individual. It may be at tops ten, of which one to buy, or else fifteen (sold tickets). It varies a lot.