That’s how dangerous it is in the Nordic region between ethnic neighbors, they sneer at each other.

Of course Sweden is on the fast track to full tardism, so outright threats violence will soon be replacing any sneering, once the “New Vikings” consolidate their political power. 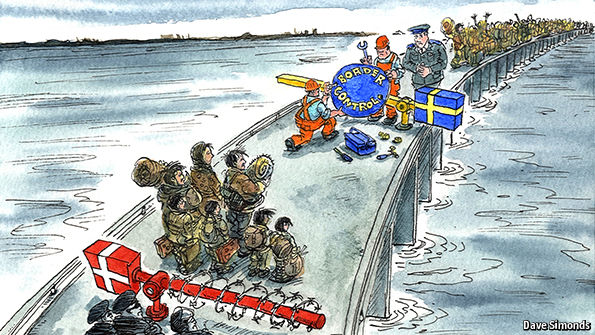 JUST 25 miles and a spectacular bridge separate Copenhagen from Malmo, Sweden’s third-largest city. Denmark and Sweden share bonds of history, language and culture. Each has a fondness for open labour markets, high taxes and a generous welfare state. But on immigration policy, the two countries are worlds apart.

Take this year’s migration crisis. Denmark’s centre-right government, propped up by the anti-immigration Danish People’s Party (DPP) since an election in June, has taken the bared-teeth approach to asylum. In September it placed advertisements in four Lebanese newspapers warning would-be migrants of the hardships they would face if they came. It grudgingly offered to take in 1,000 refugees from other European countries, then changed its mind. Sweden, by contrast, has opened its arms. This year some 150,000 Syrians, Afghans and others have sought asylum in this country of 10m people (most of them travelling via Denmark). Proportionally, that is more than Germany.