One of the rare news media sites to actually give accreditation and most impressively, link to a blog. The Tundra Tabloids! Kudos to (real) journalist, Lori Lowenthal Marcus. 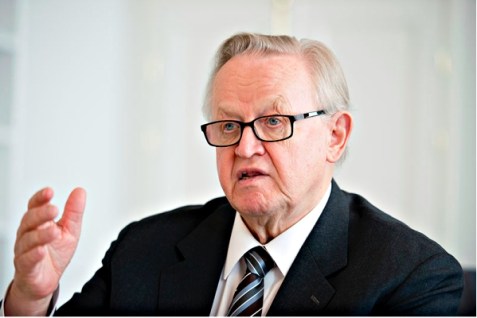 Martti Ahtisaari, the 78-year-old former president of Finland, is now the second major Scandinavian figure to point a finger at Israel for being the source of ISIS terrorism. Ahtisaari announced to the world that the ISIS terrorist attacks on Paris which took place on Friday, Nov. 13, indeed, all of the current global terrorism now being committed by ISIS, is at least in part due to the failure of Israel to appease the Palestinian Arabs.

It first happened just a few days ago. Sweden’s minister for foreign affairs, Margot Wallström, was being interviewed by Swedish Television the day after the Nov. 13 terrorist attacks on Paris. Responding to a query regarding her concerns that young Swedes may become radicalized and turn to ISIS, Wallström suggested the cause lay in the Middle East, “where not least the Palestinians feel like there is no future for them,” according to Radio Sweden.

Wallström then went on to link the two situations by saying “They feel like they either have to accept a desperate situation or resort to violence.”

Erik Wirkensjö, Wallström’s press secretary said she was not linking the Israel-Palestinian Arab conflict to the terrorist attacks in Paris.

Maybe, maybe not, although that is exactly what is sounded like what she was doing.

But Finland’s former president Ahtisaari also tied the perceived hopelessness of the Palestinian Arabs and their brethren in the Middle East to the ever-increasing rise of terrorist-based radical Islam. This former Nobel Peace Prize winner nicely weds the guilt of Europe and its refusal to recognize the deserving needy Arabs, to the hopelessness giving rise to radical Islam. In that way, Israel, especially, but also Europe in general, bear ultimate responsibility for the terrorist attacks against the West.

According to the Finnish blog Tundra Tabloids, Ahtisaari says that youngsters have been radicalized in the Middle East partly because Palestinian Arabs have been treated badly:

Okay, Sweden, now Finland. Should we take bets on who will be the next Scandinavian to blame Israel for the Nov. 13 Assault on Paris?

About the Author: Lori Lowenthal Marcus is the U.S. correspondent for The Jewish Press. A graduate of Harvard Law School, she previously practiced First Amendment law and taught in Philadelphia-area graduate and law schools. You can reach her by email: Lori@JewishPressOnline.com