They keep returning to it like a dog to its own vomit.

Goofs and buffoons. The Oslo Accords is as viable as Obama’s nuke deal with Iran. 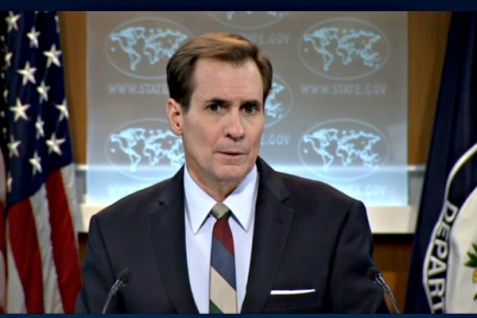 The U.S. State Dept. is equally unhappy with Israelis and Palestinian Arabs for the increase in violence – it interferes with the path to the beloved Two State Holy Grail.
By: Lori Lowenthal Marcus
Published: October 15th, 2015

Several things became clear during Wednesday’s U.S. State Dept. press briefing, the first half of which focused exclusively on the wave of terrorism in Israel.

First, the overriding goal for the United States of America is the creation of a Two State Solution and anything that gets in the way of that is a problem. The Two State Solution is the Holy Grail (as it were) regardless of whether that fixed goal will dramatically increase violence and further destabilize the region or not.

Second, the U.S. State Department despises the fact that increasing numbers of Jews are living beyond the “Green Line,” in Judea and Samaria. The U.S. hates this so much that official policy is to condemn Jews living and breathing in that area at least as much, if not more, than brutal murders of innocent Jewish civilians by Arab terrorists.

Third, the U.S. has so embraced the idea that the Temple Mount “belongs” to the Palestinian Arabs that it casts unarmed, non-hostile Jewish tourists or Israelis who peacefully ascend the Mount as the legitimate cause of savage murders of any Jews, anywhere. The U.S. has jettisoned the fact that Israel re-acquired control of the Temple Mount in a defensive war and simply handed over control of that area to the Arabs, in the hope and belief that members of all religions would have equal access to that site.

Throughout the first half of the Oct. 15 State Dept. press briefing, reporters sought to pin down State Department Spokesperson John Kirby on who and what the U.S. believes is responsible for the recent tsunami of terror in which Jews were shot, stabbed with kitchen knives, hunting knives, butcher knives and rammed with cars by Arab Palestinians.