On September 30, 2005, the major Danish newspaper Jyllands-Posten published 12 editorial cartoons, most of them depicting Islam’s founder and alleged prophet Muhammad.[1] Despite the fact that the cartoons were generally rather innocent, the very fact that they portrayed Mohammed caused outrage among many Muslims, who considered this an act of blasphemy. The Muslim anger over the cartoons in Jyllands-Posten did not peak immediately, however. It was carefully cultivated by certain Muslim groups. International reaction reached its highest and most violent point in the early months of 2006, with the burning of embassies and some deaths. 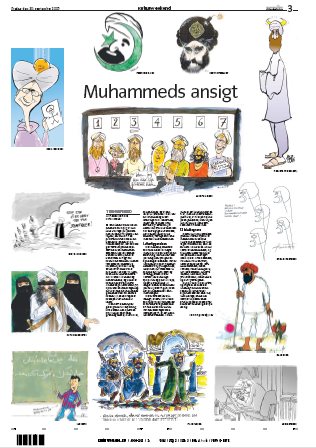 A number of Islamic terrorist plots to murder the staff of Jyllands-Posten have been uncovered and prevented in the years since then. Several key individuals involved in publishing the cartoons in 2005, for instance the then-editors Carsten Juste and Flemming Rose, still live with death threats and police protection a decade later.

The Danish artist Kurt Westergaard created the most controversial cartoon, of Muhammad wearing a bomb in his turban. The artist has since been a personal target of Islamic assassination attempts because of this. Westergaard, now 80 and retired from satire, talks passionately about being one of the most hated men in the Islamic world. “I think I still have a basic feeling of anger. I worked as a Danish cartoonist according to the Danish traditions. I had done nothing wrong. I had criticized an authority — in this case it was a religion. A big religion. And I think it’s a cartoonist’s and satirist’s job to criticize those in power, whether they are in this case a religion or it is a political party. If you work according to the Danish traditions then you offend people.”[2]

In a twist of irony, Ahmed Akkari, an imam and former radical Muslim who helped whip up international anger against Denmark in late 2005, later recanted and apologized for his actions. Fellow Muslims seem to regard his change of heart as sincere. As a result, Akkari, too, now receives death threats from his former allies. He currently lives in internal exile inGreenland, where there are more walruses than Muslims.[3]

In hindsight, it is obvious that the major relevance of the Jyllands-Posten cartoons controversy was the imposition of Islamic blasphemy laws on Europe and the wider Western world. We should submit to Islamic rule and Islamic law as obedient dhimmis. That was the real issue back then, and remains so today.

On September 26, 2015, an international conference was held in Copenhagen: The Danish Muhammad cartoon crisis in retrospect. The conference was held under heavy police security at Christiansborg Castle, behind the fortress-like walls of Denmark’s Parliament. It was arranged by the Danish Free Press Society (Trykkefrihedsselskabet). I was present in the audience. The speakers were Vebjørn Selbekk, Henryk Broder, Douglas Murray and Mark Steyn.