The jihadis, their Muslim supporters and non-Muslim political enablers have won. 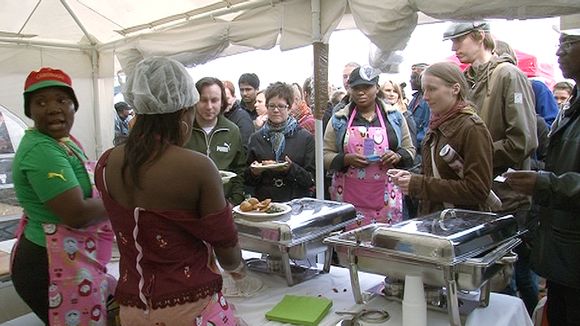 Food from around the world is one of the many attractions of the annual fest. Image: Yle

One of Finland’s largest festivals, Helsinki’s World Village, is a celebration of multicultural tolerance and respect. The free annual two-day event, known as Maailma kylässä in Finnish, has attracted more than 80,000 visitors in recent years.

This year’s festival, which opens at 11 am Saturday in Railway Square and Kaisaniemi Park, features hundreds of music and dance performances, discussions and workshops. Musically the focus is on Africa and the Middle East this time, with headliners such as Nigerian veteran Orlando Julius with UK jazz collective The Heliocentrics, Sierra Leone’s Refugee All-Stars, Lebanese indie rock band Mashrou’ Leila and Finnish-Beninese band the Helsinki-Cotonou Ensemble.

Some 300 NGOs, most involved in international development, are taking part. The chief organiser is Kepa, the umbrella organisation for Finnish civil society organisations involved in development cooperation and global affairs. Main partners include the Finnish Foreign Ministry, the EU and the Red Cross.

No alternative found for “Charlie” exhibit

The festival will not however include a planned Freedom of Speech Village, which organisers cancelled due to security concerns. The stand was to have included an “I am Charlie” exhibition inspired by the terrorist-hit French satirical weekly Charlie Hebdo. The planned show would have included drawings of the Prophet Muhammad similar to those which have triggered violent attacks in Paris, Copenhagen and elsewhere.

Kepa programme director Outi Hannula told Yle the installation was cancelled due to security concerns, based partly on a serious warning from the Finnish Security Intelligence Service (Supo).

The Freedom of Speech Village was to have been located in a huge tent at the centre of the festival grounds, along with booths set up by dozens of organisations. Hannula says the main problem was the impossibility of restricting access to the tent or the sprawling festival area.

Hannula says that organisers tried to find a location for the installation on or near the festival grounds that could be securely guarded, but that no such solution could be found.

“We also offered the alternative that the exhibition could be set up without the Muhammad images, but the organisers did not want to do this,” says Hannula.

The installation had been planned by The Association for Cultural, Scientific and Advocacy Magazines, Kultti, along with the Finnish PEN organisation, Electronic Frontier Finland, and Reporters without borders. They argued that staging only part of the exhibition would have been a form of censorship and undermined the whole point of the show.

Earlier this spring, an “I am Charlie” exhibition was forced to move from several locations in Helsinki because of perceived security threats.

NOTE: The TT will be there covering the event on both days.