This is the second time a US ambassador has been attacked during the Obama administration.

US Ambassador to South Korea Slashed by Activist

US Amb to South Korea Mark Lippert was attacked in Seoul, slashed on face and hand.
By: Lori Lowenthal Marcus
Published: March 5th, 2015 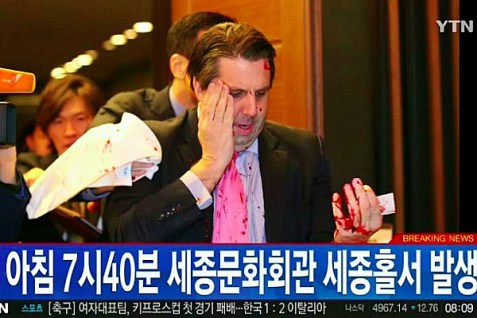 U.S. Ambassador to South Korea Mark Lippert was attacked in Seoul as he was about to begin a breakfast meeting.

Lippert, 42, was slashed in the face and on his hand.

Security officers leaped on the attacker, pinning him down. The attacker, Kim Ki-jong, reportedly shouted demands for North and South Korea to be united. He also condemned the annual joint U.S.-South Korea military exercises which are currently taking place.

North Korea has condemned those exercises as well, claiming they are preparations for an invasion of North Korea.

Lippert is a Stanford University graduate, who served in the U.S. Navy and served as Chief of Staff to Secretary of Defense Chuck Hagel, and previously held numerous posts in the U.S. government, including stints working for Sen. Dianne Fienstein and Cong. Tom Daschle.

The ambassador was a foreign policy and defense adviser to Barack Obama during his first presidential campaign, and later served as an official adviser to President Obama. The president called Lippert after the attack to wish him a speedy recovery.