The US government should have been spearheading the charges against the P.A. from the very beginning, but because of the rot and corruption in government, they threw up roadblocks.

Children of Jewish Holocaust Survivors: ”..we must remember that each year the U.S. gives $400 million to the PA, which in turn gives about $50 million to terrorists in Israeli jails.’ To those who are thinking this is just about Jews or just about Israel, it’s not. It’s about you.”

The Palestinians put up a spirited defense. That the jury returned a unanimous verdict on two dozen counts after only two half-days of deliberations speaks volumes to the damning evidence presented by Yalowitz, Nitsana Darshan Leitner of Shurat HaDin and their colleagues. […]

One would think that the president or maybe the attorney general or even the secretary of state might put out a statement on how wonderful the American system of justice is for giving hope to people whose lives were crushed by the ever-growing scourge of international terror. But not. one. word.

“while the American judicial system, utilizing tools created by the legislative branch, brought us justice, another branch of the American government has repeatedly denied it to us.”
By: Alan Joseph Bauer
Published: February 26th, 2015 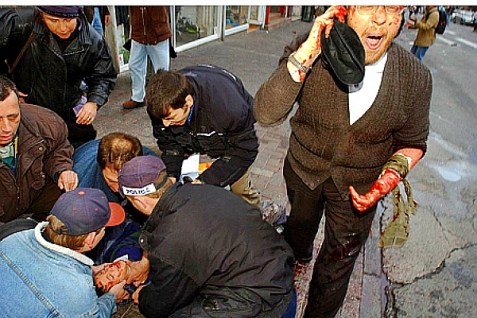 Alan Bauer’s anguish captured after March 21, 2002 Arab terrorism grievously wounded his son, Yehonathan, being attended to by emergency personnel as he lay injured on the ground.
Photo Credit: Nati Shohat/Flash 90

In New York this week, a jury of twelve men and women returned a guilty verdict on all counts against the Palestinian Authority (PA) and the PLO for their roles in six terror attacks that left ten American families, including mine, devastated. That jury awarded over $218 million in damages to the thirty-three plaintiffs in our case, Sokolow v. PLO.

In Washington, one could hear a pin drop as not one official praised the proper working of the American justice system in punishing terror where it counts—in its pocketbook.

The law applied in Judge George B. Daniels Manhattan courtroom was the Anti-Terrorism Act, or ATA. That law was passed by Congress and signed by Bill Clinton in 1993.

As our lawyer, Kent Yalowitz of Arnold & Porter, stated in his summation before the jury: wherever an American citizen goes in the world, the ATA goes with him. The ATA was the one positive byproduct of the brutal murder of Leon Klinghoffer aboard the Achille Lauro: the U.S. found it did not have the criminal or civil tools to punish those who harmed Americans beyond U.S. borders. The ATA allows for both criminal prosecution as well as civil penalties, and was passed by large majorities in both houses.