At least 18 people have been killed in clashes between police and protesters across Egypt, officials said.

Three police cadets were among the dead, and dozens of protesters were also injured, the officials said.

The clashes follow the death of an activist in a march in the capital Cairo on Saturday.

The protests were staged to mark the fourth anniversary of Egypt’s 2011 uprising, which toppled long-time leader Hosni Mubarak.

Security in major cities was tightened ahead of the anniversary, and key locations in Cairo were blocked off. The Corinthia Hotel is here seen bursting into flames after the deadly attack by Islamic State militants in Tripoli, Libya. Five guards and four foreigners were killed when gunmen stormed the luxury hotel

By DAMIEN GAYLE and TED THORNHILL FOR MAILONLINE and AGENCIES

Five guards and four foreigners were killed when gunmen stormed a luxury hotel in Tripoli, triggering an hours-long standoff.

The attack on the Corinthia Hotel, which sits along the Mediterranean Sea, underscores Libya’s lawlessness since the Western-backed campaign to overthrow and kill Muammar Gaddafi.

The US State Department said it was looking into reports of an American casualty in the attack, which only ended when two of the attackers blew themselves up with a grenade.

January 26, 2015 (JUBA) – At least 11 people were killed and several others injured in an ambush in South Sudan’s Western Bahr el Ghazal state on Saturday, an official has confirmed.

“The commissioner’s car was able to move for about 20 minutes from the scene of the attack and broke down,” he added.

Several bullets were reportedly fired at the car before an army battalion was sent from Raja county to the scene, where a number of bodies were subsequently recovered.

“In one car, four bodies were found and in another car, five men were found with their throats slit,” Hassan said.

At least four journalists, including the head of Raja radio, were among those killed.

Islamabad: At least 35 militants, including some foreigners, were killed today in Pakistan after security forces carried out “precise aerial strikes” against Taliban in the restive northwestern tribal region.

The militants were killed after forces targeted Datta Khel area of North Waziristan, one of seven semi-autonomous regions of Pakistan along Afghan border, military officials said.

“In precise aerial strikes 35 terrorists including some foreigners were killed,” a military statement said.

By Diaa Hadid The Associated Press

BEIRUT – The United Nations Special Coordinator for Lebanon Sigrid Kaag expressed “grave concern” Sunday over a border battle between Lebanese forces and Syria-based fighters from the Islamic State group that killed eight soldiers, as the chaos of Syria’s war increasingly threatens the security of its Mediterranean neighbour.

Kaag issued her statement as Lebanese television broadcast funerals of the soldiers killed during the fighting near the northeastern Lebanese village of Ras Baalbek on Friday, after what appeared to be a cross-border attack from neighbouring Syria. 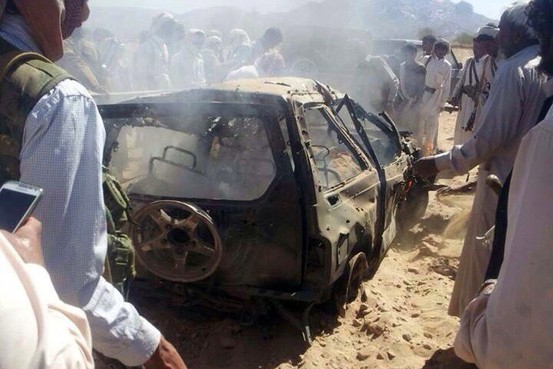 A burned car targeted in a drone strike that killed two suspected militants and left a 12-year-old boy dead in Yemen on Monday. PHOTO:AGENCE FRANCE-PRESSE/GETTY IMAGES
By ASA FITCH and HAKIM ALMASMARI

SAN’A, Yemen—A U.S. drone strike killed two suspected al Qaeda militants in Yemen on Monday, the first such attack since U.S.-backed President Abed Rabbo Mansour Hadi said he was resigning last week, while the State Department said it was closing its embassy in the capital until further notice.

The State Department has reduced staff at the U.S. Embassy in San’a over the past week as tensions and clashes intensified. On Monday, it said the embassy would continue to provide emergency consular services and remains “operational,” according to a message on its website.