Forget the meme of the ‘reform’ -minded King Abdullah of the Sowdies, as Debbie Schlussel reminds us: 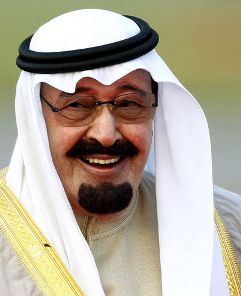 Muslims are the new Nazis, but they are also the same old Nazis. And, yes, this is the same King Abdullah for whom George W. Bush removed women from the air traffic control tower and tarmac at the Waco airport. Yup, same guy that Barack Obama bowed down to. They kissed the ass that kisses Hitler’s dagger.

King Abdullah of Saudi Arabia dead at 90, half-brother succeeds him

King Abdullah of Saudi Arabia, the powerful U.S. ally who joined Washington’s fight against Al Qaeda and sought to modernize the ultraconservative Muslim kingdom has died at 90, according to Saudi state TV.

His successor is his 79-year-old half-brother, Prince Salman, who recently has taken on the ailing Abdullah’s responsibilities.

The announcement came in statement read by a presenter on Saudi state TV, which aired video of worshippers at the Kaaba in Mecca.

A former American diplomat close to the Saudi royal family told Fox News the death of King Abdullah, coupled with the collapse of the government in Yemen, is a “worst case scenario” for the U.S. because current events are allowing Iran to extend its reach and influence in the region.