No longer has parishioners, but he wears the pinkish-purple shirt well! 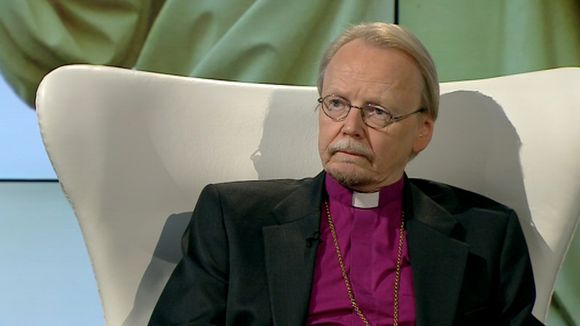 The head bishop is placating people who will never darken the doors of a church, at the expense of those who find his statements repulsive and anti-Christian, who regularly do go to church, but will no longer (at least there).

NOTE: Yet another traditional institution swirls around the drain. The Left smiles with glee, especially after a few years when the fad of getting married in homosexual circles wanes, but society is left with the definition of marriage irrevocably changed. Mission completed.

The ramifications of Friday’s historic vote to allow gay marriage continue to be felt in Finland’s religious establishment. The Archbishop of Finland Kari Mäkinen had stated his support for the law, and said he “rejoiced” when it passed, and that seems to have caused a spike in resignations from the church.

Between the law’s approval on Friday and midnight on Saturday nearly 7,800 people had resigned from the church via an online service designed to ease the resignation process. That means they will no longer pay church taxes—the main source of revenue for the Lutheran Church in Finland.

According to the comments given to the website, most of the resignations were in protest at Archbishop Mäkinen’s comments.

Christian Democrat leader and Interior Minister Päivi Räsänen said on Saturday that she would continue the fights against the gay marriage legislation.