But don’t jump to other conclusions because dinnerjacket and other Iranian leaders were seen smooching with the Jewish neturei karta stooges, it’s because they weren’t  (obviously) going to be praying any time soon. 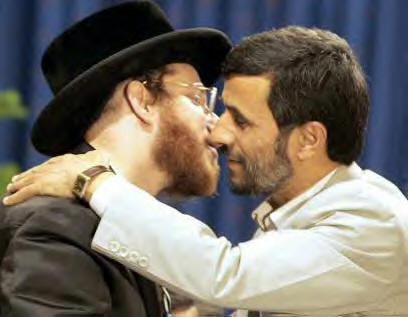 (Hat tip, and all due sympathies, to the courageous Amil Imani, who sent me this image)

Translation of Farsi caption, beneath image:

“This is Iran’s deceased Ayatollah Montazeri (d. December, 2009) in the photograph where he rejected  ‎shaking the hand of a fellow Jewish  Iranian. He declined the handshake because he  did not want to become dirty (najis) and his cleanliness despoiled  for  his  “Salaat” preparation  (for prayer, as a Muslim),  by contacting the (najis, infidel) Jew.” (thanks to S for the translation)

Some of us who have long fought against the terrible regime in Tehran were fortunate to have received wise observations from Montazeri over the years, and I am confident that, with the passage of time and the changes that will take place in Iran, scholars will marvel at the international dimensions of the Grand Ayatollah’s understanding and the range of his activities.

But perhaps the most curious of these early assessments includes a contention by Michael Rubin that  “…the real Achilles Heel to the Iranian regime is Shi’ism.”167  Reuel Marc Gerecht, writing in October, 2010, ten months after Montazeri’s death, dubbed the Ayatollah, simultaneously, “the spiritual father of Iran’s Green Movement,” and the erstwhile “nemesis of Ali Khamenei, Iran’s ruler,” whom Gerecht derided (in contrast to Montazeri), as “a very mediocre student of the Sharia.” 167a

These odd viewpoints were (and remain) merely the extension of a profoundly flawed, ahistorical mindset which denies the living legacy of Shiite Islamic doctrine and its authentic, oppressive application in Iran, particularly, since the advent of the Safavid theocratic state at the very beginning of the 16th century. A gimlet-eyed evaluation of Montazeri’s recorded views—entirely consistent with traditionalist Shi’ism—does not comport with the conservative eulogies of the late Ayatollah by Ledeen, Rubin, Gerecht, and their ilk.

Consistent with the institutionalized codifications  of Islam’s classical Sunni and Shiite legists (to be elaborated in the next section), Montazeri’s written views (from his Islamic Law Codes [Resaleh-ye Tozih al-masael]) on jihad war reiterate the doctrine of open-ended aggression to establish global Islamic suzerainty, and the universal application of Sharia: 168

[T]he offensive jihad is a war that an Imam wages in order to invite infidels and non-monotheists to Islam or to prevent the violation of treaty of Ahl-e Zemmah [Ahl-al-Dhimma, the humiliating pact of submission binding non-Muslim “dhimmis” vanquished by jihad]. In fact, the goal of offensive jihad is not the conquest of other countries, but the defense of the inherent rights of nations that are deprived of power by the infidels, non-monotheists, and rebels from the worship of Allah, monotheism, and justice. “And fight them until there is no more Fitnah (disbelief and polytheism: i.e. worshipping others besides Allah) and the religion (worship) will all be for Allah Alone [in the whole of the world].,” (Koran 8:39) 168a…This verse includes defensive as well as offensive jihad. Jihad, like prayer, is for all times and is not limited to an early period of Islam, such as Muhammad, Ali, or the other Imams. Jihad is intended to defend truth and justice, help oppressed people, and correct Islam. In the Mahdi’s occultation period, jihad is not to be abandoned; even if occultation lasts for a hundred thousand years, Muslims have to defend and fight for the expansion of Islam. Certainly, if in early Islam the goodness was in the sword, in our time the goodness is in artillery, tanks, automatic guns and missiles. . . in principle, jihad in Islam is for defense; whether defense of truth or justice, or the struggle with infidels in order to make them return to monotheism and the divine nature. This is the defense of truth, because the denial of Allah is the denial of truth.

How would non-Muslims fare under the Shiite Islamic order—forcibly imposed by jihad—as  envisioned by Montazeri?