They say he has to apologize first for calling Mohamed a pedophile.

Eh, it ain’t going to happen. That said, I do not feel it is in any of our best interests to give, any mosque any kind of credibility by a visit whatsoever. What is there to talk about? I don’t need to hear any of them trying to persuade me that Islam is this or that, I already know all I need to know about it.

NOTE: So all you Muslims out there, don’t even think about inviting my to your mosque, I ain’t interested one bit whatsoever.

Halla-aho banned from the mosque

The Finns are on Valentine’s Day visiting an Islamic mosque. Other Finns party members are welcome, but the MP Jussi Halla-aho first needs to apologize. 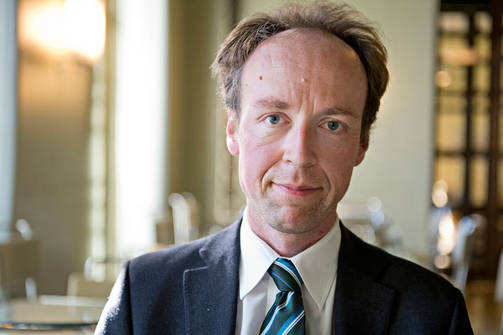 MP Jussi Halla-aho is not going to publicly apologize for his views on the Prophet Muhammad. (JENNI Gästgivare)

The True Finns visit TO the mosque located in the heart of Helsinki Lönnrotinkatu. (PASI LIESIMAA)

The visit is organized by Finnish youth organization based at the district, but the young people, but that has registered for, inter alia, the party secretary-Riikka Slunga Poutsalo.

All in all, the Helsinki city center, it comes to the mosque for about fifteen Finns Party members, among them the so-called critics of immigration, the members of the Finnish Sisu  organization.

– We want to get to know their religion, as well as views and to meet in person, the young chairman of the Finns Party Simon Elo  of reasons for the visit.

Elo is not going to visit (the mosque) himself , but he visited last year a mosque in Turku.

– We talked in good spirit, and even though we were not all in agreement, both parties understood that it was anything personal.

Also, Finns MP Jussi Halla-aho was supposed to take part in a visit, but the host Finnish Islamic community said that this is not a welcome to the mosque unless he first publicly ask forgiveness for his writings on the Prophet Muhammad.

Simon Elo said in that the entire event was canceled yesterday due to Halla-aho being banned.

– I admit that my first reaction was not to go at all, if all of them are not allowed. Then I counted to ten and thought about it a little longer. It is probably better off that the discourse takes place in spite of this decision.

“Guests can be chosen”

The visit has been organized by the Somalia born Abdirahim “Husu” Hussein. He has served as Chairman of the youth center and was the Central party candidate in the parliamentary election in 2011.

Immigration and Multicultural affairs active Hussein, also can be heard on a YLE program called Ali and Husu-discussion program in conjunction with a stand-up comedian Ali Jahangir.

Hussein says the idea for a visit started on his blog post, in which he stated, MP Teuvo Hakkarainen (ps) is afraid of Muslims.

– After that I was contacted by the Finns  young group who wanted to come to visit the mosque.

Hussein says that he understands the community decision to ban Halla-aho .

– While Halla-aho has received writings judgment in court, he has never asked to be forgiven for them. Community may choose its guests.

Hussein points out that Halla-aho’s being banned to the community despite its name, does not represent all Muslims in Finland, but is one of many Muslim communities.

The visit has strict security measures and must be known to the mosque only in advance.

– We want only those people there we can trust. We do not want a public disturbance and problems Finns Elo explains.