The Islamic world, bound to repeat the misery it creates until it sheds the desert creed.

The film Groundhog Day showed us a man who was doomed to repeat the same day over and over again until he learned to use his time to become a better person. Islam has been stuck in its own form of that cycle, repeating the same few decades over and over again, moving from religious ecstasy to holy war, seeking redemption through religious tyranny and Jihad, and finding that there was no escaping the internal decay and instability in the veins of the religion.

Islam’s only redemption is in establishing a theocracy. Its commitment to power and the indulgence of the earthly and heavenly paradise of loot, slaves and violence, led to its own degeneration over and over again. Having no other spiritual form than the exercise of power, it has corrupted itself each time, and then attempted to exorcise the corruption through more of the same.

Groundhog Day is the long eternal tragedy of Islam, which always sees its shadow and always ends up with six weeks, six months or six hundred years of more winter. That hopeful time when the bitter cold of winter begins its slow transition into the warmth and renewal of spring never comes for Islam. 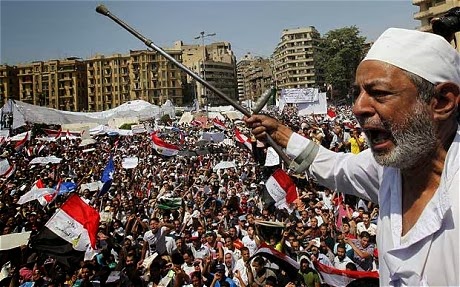 In a reversal of the cycle of season, the Arab Spring led to the Islamic Winter, but that is the endless pattern of Islamic attempts at reform and rejuvenation, which rather than finding renewal in their attempts at transformation only go on perpetuating the same cycle of violence, tyranny and oppression.

There is a peculiar tragedy to a religion which cannot escape its own destructive nature, each time it reaches for some form of redemption, its hands come up dripping with blood and it all ends in more bodies and petty tyrannies.