An end to the EU as a whole would be an even better thing. Here is a tip if you want to ruin the day of the bureaucrats and politicians in Brussels. Just mention next year’s European elections and they will become extremely nervous and agitated. They will fume with anger and warn you about rising populism, a threat to democracy.

Next May’s European elections, in which almost 400 million people in the 28 EU member states will be allowed to cast their votes, will in all likelihood produce a landslide against the Eurocrats. What will manifest itself, however, is not a rise of populism, but a victory for democracy.

For decades, Brussels has been able to do what it pleases. That period is over. People have finally come to realize that so-called europhiles aim to destroy Europe’s nations, the homes of national democracies. And people are not going to let it happen. They are no longer buying the lie that patriotism is dangerous, that it is a vice and not a virtue. They are reasserting their national pride and identity.

Robert Schuman, who was one of the EU’s founding fathers 60 years ago, used to say that the aim of European integration was “to make war not only unthinkable but materially impossible.” But the idea that Germany, France, Britain and other nations in the past went to war because they were sovereign nations is simply ridiculous. They went to war because they had fallen for totalitarian ideologies. Democracies do not go to war against each other; they trade with one another. 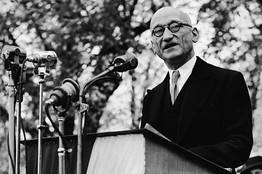 Schuman and his contemporary followers, who are still trying to abolish the old European nation-states and replace them with a federal pan-European superstate, are politicians of the past. The EU represents the old political order. Today, a new generation of voters and politicians has emerged. I am one of them. My hero is not Robert Schuman, but the American visionary Ronald Reagan, who in his farewell address advocated a resurgence of national pride, which he called the “new patriotism.” As Reagan had it, this meant “a love of country and an appreciation of its institutions.”