As are the Knicks and the Yankees. I agree with Daniel (Sultan Knish), that the names we call ourselves are part of the rich American history that serve to bind the fabric of society into one tightly knit cloth. We just have too many liberals pulling at the strands, and all in the name of supposed ‘tolerance and fairness’ as they further unravel society. That which binds the nation, they are trying to undo, and in the name of multiculturalism.

NOTE: The only point on which I disagree with Daniel, is the repeated usage of ‘multiculturalism’ term in defining the ethnic collage of the many peoples who call themselves Americans. I prefer to call it a multi-ethnic society with one defining culture, an exclusive American one.

We could go into the historical origins of the Redskins name, which is far less intolerant than Yankees or Knickerbockers, but it would mostly be a waste of time. The history doesn’t really matter. Language exists in the present and in the present the Redskins are an iconic invocation of a mythical history in the same way that every other Indian sports team name is.

Liberals nurtured on Orientalism and worries about cultural appropriation are uncomfortable with that; but that’s their problem. It’s perfectly normal for the old wounds to become the bonds of a new society. It’s part of the healing process. It’s post-racial and post-everything in a good way.

When the Yankees play baseball in the Bronx and the Knicks hit the court at Madison Square Garden, the two teams may belong to different sports, but they’re both part of an exchange of taunts and slurs that no one remembers or cares about anymore. 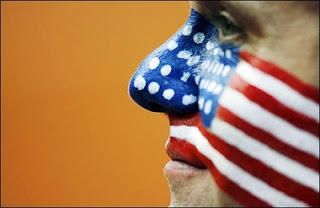 The Knicks are short for the Knickerbockers, one of the derogatory names that English New Yorkers called the Dutch New Yorkers whom they had seized the city from. And the Dutch returned the favor by calling the Anglo newcomers, John Cheese or Jan Kees, which eventually became Yankee.

The English mocked the Dutch and the Dutch mocked English and then both terms became part of the city’s cultural heritage and even a point of pride. Yankee may still have a derogatory meaning in the South and in Europe, but in New York, it’s on every other baseball cap and the Knicks are on every other jersey; including some of the shorts that resemble the Knickerbockers of the Dutch.

This sort of thing happens a lot in a multicultural society. What used to be a point of insult, blends into the common cultural heritage. The minority teenagers wearing Knicks shorts and Yankees caps care as little about the Dutch and English slurs that got the whole thing started as they do about the Redskins, a term that is as equally out of date and nearly as obscure.

It shouldn’t be surprising that most American Indians care as little about the Redskins or the Braves as we care about the Yankees and the Knicks. It’s the white liberals descended from the Knickerbockers and the John Cheeses who don’t seem to grasp that a minority group might not be offended by the same things that they aren’t offended by.