Counter-tribalism is obsessed with the “Other”. It regards the interaction with the “Other” as the most socially and spiritually significant activity of a society. Counter-tribalists instinctively understand diversity as a higher good in a way that they cannot express to outsiders. They may cloak it in post-tribal rhetoric, but the emotion underneath is the counter-tribal rejection of one’s own identity in search of a deeper authenticity, of the noble savage within.

Man begins with the tribe. The tribe is his earliest civilization. It is enduring because it is based on blood. The ties of blood may hinder its growth, the accretion of tradition holds it to past wisdom while barring the way to learning new things, but it provides its culture with a physical culture. 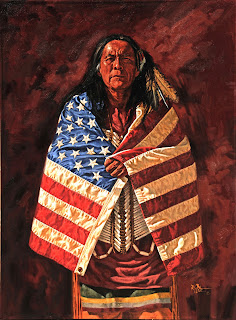 Our America is tribal, post-tribal and counter-tribal. It is a strange and unstable mix of all these things.

The post-tribal could be summed up by the melting pot, a modernist idea of a cultural empire, the E pluribus unum of a society in which culture could be entirely detached from tribe, manufactured, replicated and imposed in mechanical fashion. The counter-tribal and the tribal however are best summed up by multiculturalism which combines both selectively.

Modernism was post-tribal. It believed that advancement lay with abandoning the tribe. Post-modernism however is counter-tribal. It doesn’t just seek to leave the tribe behind, but to destroy the very notion of one’s own tribe as the source of evil, while welcoming the tribalism of the oppressed.

The post-tribal and counter-tribals both felt that the rejection of one’s own tribe was a cultural victory. But where the modernists thought that tribe itself was the evil, the post-modernists think that it is only their tribe that is the evil. The modernists had no more use for the tribalism of any culture than that of their own. The post-modernists however believe that the tribalism of oppressor cultures is evil, but that of oppressed cultures is good. And so they replace their own tribalism and post-tribalism with a manufactured tribalism of the oppressed consisting of fake African proverbs and “Other” mentors.