It was Brisbane’s turn yesterday to face the fury of the pro-BDS campaign against the Max Brenner Chocolate shops – but the 40 protesters found themselves herded by 30 police into a prepared enclosure well away from the popular store.

“The 40+ decidedly white bread protesters bleated their inane anti Israel slogans as if in a street theater production of George Orwell’s “Animal Farm”.

A crowd of about 130 multicultural multifaith supporters rallied against the demonstrators drowning them out with jeers and generally positive messages.

Hot Chocolate, dancing and a sense of camaraderie made it an enjoyable afternoon.

In an email to the community this week QJBD President Jason Steinberg had asked supporters not to engage with the protesters and not to provoke them.

Many supporters at the protest felt that there was a need for the community to do something to challenge these protesters and not ignore them.

In the time it took to order a hot chocolate the protesters gave up and moved on down the street claiming a “moral victory” over democracy and free thought. 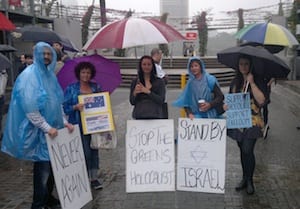 Patrons of Max Brenner’s where not inconvenienced and many where unaware of the protest taking place behind the building.”

A community spokesman told J-Wire: “The protesters were heavily outnumbered. Not only was there a strong communal presence, but also support from non-Jewish groups against BDS.”

Jason Steinberg said he was pleased that there had been no serious incidents and praised the police for the way they handled the protest.

Please click through to jwire for the rest of this article.