Because we all know that supporters of Jeffersonian democracy are obsessed with female virginity. KGS 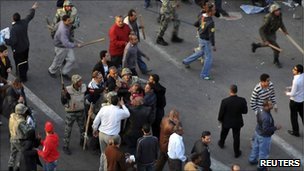 Amnesty International is calling on the authorities in Cairo to investigate.

It says at least 18 female protesters were arrested after army officers cleared Tahrir Square on 9 March.

It says they were then beaten, given electric shocks and strip searched.

The army denies the allegations.

A 20-year-old woman, Salwa Hosseini, told Amnesty she was forced to take off all her clothes by a female prison guard in a room with open doors and a window.

Forcing women to have ‘virginity tests’ is utterly unacceptable”

She said that male soldiers looked in and took photographs of her while she was naked.

The demonstrator said a man in a white coat later carried out a ‘virginity check’ on her and she was threatened with prostitution charges.