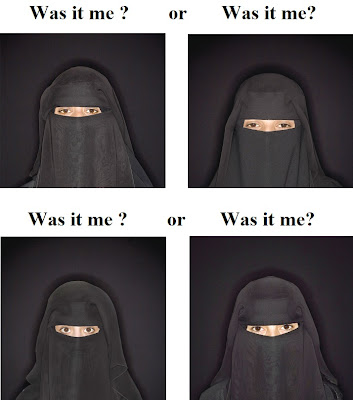 Here’s another excellent example why the banning of the “freedom bag” known as the burka, is a sensible policy, the authorities are put into a position of being damned if they ask for a full facial when I.D.ing a burka’d woman, and damned when they don’t. Check the bottom of the article in emboldened print where the lawyer for the defendant defiantly demanded that the authorities prove that she was the woman who filed the false complaint of police harassment. Unbelievable but it’s to be expected. KGS

A MUSLIM woman who accused a New South Wales police officer of forcibly removing her face veil has been sentenced to six months’ jail.

Carnita Matthews, 46, of Woodbine in Sydney’s south, had in August pleaded not guilty to one charge of knowingly making a false complaint relating to events in June.

But in Campbelltown Local Court today, Magistrate Robert Rabbidge said the “evidence was overwhelming” that Matthews had submitted a false declaration to police.

“There is not a shadow of doubt in my mind beyond a reasonable doubt that she knew that the complaint she was making was false,” he said in sentencing Matthews.

The mother of seven was stopped in June by a police officer at Woodbine for a random breath test. She later filed a police complaint alleging the officer who pulled her over had tried to pull off her hijab, which concealed her entire face except for her eyes.
However, the court was told that an officer who three days later accepted a statutory declaration from a burqa-clad woman he assumed to be Ms Matthews failed to check her identification.

Ms Matthews’ lawyer, Stephen Hopper, said there was no way for police to prove that his client was the one who signed the statutory declaration at Campbelltown police station on June 10. Mr Hopper said that meant Ms Matthews should not have been charged with the offence of making a false complaint to police.