Skip to content
Home
/
2010
/
November
/
11
/
Uncategorized
/
HOW MUCH OF OBAMA’S 150 MILLION WILL GO TO THE MUSEUM HONORING THE MAN WHO ORDRED THE MURDER OF US AMBASSADOR CLEO NOEL……?
Facebook
Twitter
Google+
LinkedIn
Pinterest
An acquaintance mentioned the following scenario to the Tundra Tabloids concerning the recent news of the Obama administration handing over 150 million dollars to the Palestinian Authority, (posted below). FresnoZionism takes note of the P.A spending over 3 million dollars on Stinky Arafat’s new museum, where his smelly kefiyya (that hasn’t been washed since his death) will be on display.
The interesting thing here is, “what are the odds that some of that $150 of US money will got towards that museum, honoring the terrorist who ordered the murder of US Ambassador Cleo Noel.“ The late US Ambassador was murdered in cold blood under the orders of Arafat. What would the average US taxpayer say if they knew that it’s very possible that the US will be funding the museum of this heartless thug? Just saying. KGS 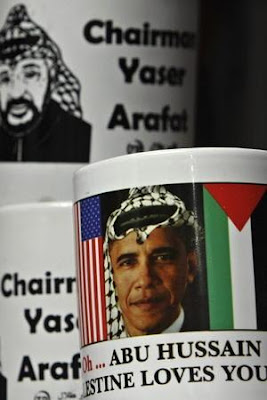 U.S. will give Palestinians extra $150 million in aid

Secretary of State Hillary Rodham Clinton announced Wednesday that the U.S. would give the Palestinian Authority an additional $150 million in direct aid.

“The Palestinian Authority [PA] is reversing a history of corruption and producing results that actually matter and improve the lives of Palestinians,” Mrs. Clinton said during a satelite videolink with Palestinian Prime Minister Salam Fayyad.

“As a result, new businesses are opening, taxes are being collected, services are being delivered. Security is much improved, and the economy is growing,” she said.

The announcement comes as Israeli-Palestinian peace talks, renewed Sept. 2 with the aim of achieving an agreement within a year, remain in limbo.

The Palestinians suspended their participation after the Sept. 26 expiration of Israel’s 10-month settlement moratorium in the West Bank, and U.S. efforts to coax Israeli Prime Minister Benjamin Netanyahu into extending the freeze have failed.