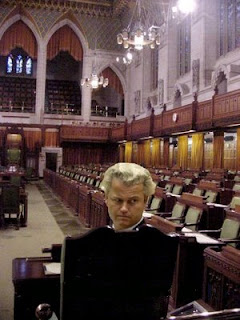 Republished courtesy of the Gates of Vienna:

Acquittal for Geert Wilders on a Second Count

The prosecution in the Geert Wilders case has previously demanded that the charge of insulting a group be dropped. Now Mr. Wilders must also be found not guilty of the count of inciting hatred, according a statement today by the prosecutor

Our Flemish correspondent VH points out that we’re not there yet — there is one more charge (discrimination), and in the end it’s up to the three judges to decide.

[Friday October 15] The Public Prosecutor (OM) today has asked the court in Amsterdam for acquittal of Geert Wilders of incitement to hatred, which count included among other things a quotation in which the Quran is compared to Mein Kampf. According to the OM, none of the statements for which the PVV leader is standing trial meets all criteria for incitement to hatred. The prosecution has asked for acquittal for this part of the indictment.

Later today the OM will expresses its claim.

The comparison between Adolf Hitler’s book Mein Kampf and the Quran is according to the OM not from Wilders, but is a quote from the writer Oriana Fallaci. The Amsterdam court [which had ordered to the prosecution of the PVV leader] previously had instructed to add the quote to the list of statements for which the PVV leader is standing trial.

Tuesday, the prosecutors Birgit van Roessel and Paul Velleman had already indicated that Wilders is not guilty of insulting a group. For that they also asked acquittal.