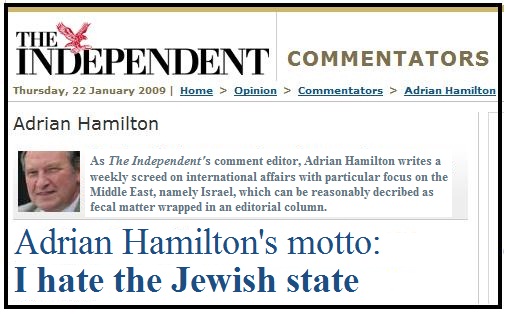 Hamilton of course is taking on the arrogant role for himself in defining for Israel, what it can and cannot be, if that’s not anti-Semitism, than what is? While the call for an oath of allegiance for Arabs living in Israel could perhaps be spun as a bad PR intitiative,  -besides, what’s to stop an Arab from lying about it anyways, we’ve already heard the NYC would be bomber stating that he lied when swearing allegiance to the US upon accepting citizenship- the TT doesn’t think what Israel is suggesting as new legislation is either outrageous, or even close to anything that resembles racism.
Every state has the right to define for itself what the national character of the state will be. We already see many states in Europe with upset citizens for forcing a policy of multiculturalism without ever holding a referendum on it, at least the state of Israel is responding to the citizens of Israel who have always insisted on the Jewish character of the state being of utmost importance. Europeans like Hamilton represent the kind of anti-Semite that has always been the most dangerous, the intellectual who loathes the Jewish state and will use any kind of “slight of tongue” to fool the reader.
Israel has never told the Netherlands to become a multicultural nightmare nor told the Brits to import millions of Muslims, many of whom who reject British culture. Or neither did Jerusalem demand that successive German governments take in millions of Turks and that one day, they should announce that “Islam is Germany”. That was their own decision, so why should any Israeli give a toss what fecal head like Hamilton says about the Jewish character of Israel. Piss off. If you want to read fecal head’s piece, click here.