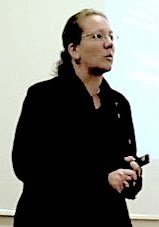 The Tundra Tabloids’ friend and colleague, Elisabeth Sabaditsch-Wolff, recently received news of her impending trial, not through her lawyer, or through Austrian court system, but through the Austian media. So it looks like the forces arrayed against Elisabeth, while holding their cards close agianst the chest, have in part, already shown their hand, they are going to use dishonest methods to ram-rod a conviction in order to implement their warped version of justice and let it serve as a warning to others not to speak openly about Islam, let alone criticize it.
The Baron published last night a post about it while the Tundra Tabloids was offline, it’s such a thorough work, that it should be required reading for everyone interested. Here is what Elisabeth mentioned in an email:

I just had a long talk with my legal representation. This is a huge judicial scandal. My lawyer has tried to get the documents detailing my case and the charges. In vain. the public prosecutor cited “computer problems”, the clerks said there is a note in my case that nothing is to be made public (wonder why the media knew about it then), and he was shoved from clerk to clerk, getting nothing. So far we know that I will be tried, but nothing else.

I have nothing whatsoever in my hands. I cannot defend myself at the moment because neither my lawyer nor I know the precise charges.
It makes me wonder about our judicial system. It is outrageous that the media in both Germany and Austria knew about this before the accused.

Read the Baron’s full post: “Justice Must Not Be Made the Handmaiden of Sharia”
Vlad Tepes writes: Please see //vladtepesblog.com/?p=25854 for the whole story on Elisabeth and please go to: //preview.tinyurl.com/y8nue6w for the whole truly excellent speech.