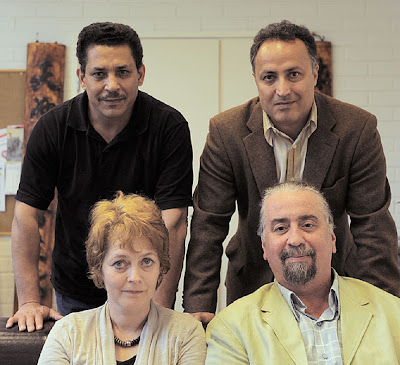 Folks, this is the response to the successes of the True Finns party in recent elections. The TF (PerusSuomalaiset) along with Jussi Halla-aho have effected the domestic political dialogue in regards to immigration, the criticism of mass immigration and the need to remain firm where refugee quotas etc. are concerned.
Now comes the brainchild of Iranian, Alexis Kourus, an editor of the anti-Israel Helsinki Times English language newspaper, who pretends to use the newly formed Immigrant Parliament of Finland as a vehicle for intergration, (his words) but in reality, it’ll be used to spearhead destructive (divide and cause trouble) multicultural policies.
His fellow board members include: Umayya Abu-Hanna, a Fakestinian propagandizer, pseudo journalist and author, Jeremy Gould, a professor of Sociology and Social Anthropology, Mustafa Gürler, a Turk Cultural Producer for the Helsinki Cultural Centre, Eilina Gusatinsky a Russian Magazine editor, Mulki Mölsä, a Somali doctor and activist,  and Ahmed Akar, a Tunisian and another Helsinki cultural apparatchik.
They’re (the IPF) here to press their own multicultural agenda, to ensure that there will not be a permanent Finnish culture, but a quasi blanket of differing cultures that will by default of their existence, be declared equal to that of Finnish culture. This is identity politics in the raw, and they mean to push that kind of politics where ever, and when ever possible.
Here is an indicator of their true intentions, which is not to integrate into the framework of Finnish society and to one day, have their children regarded as “ethnic Finns”. Nope, its to ensure a permanent immigrant identity (read= Islam) of themselves and their offspring, not integration.
Why not try to send candidates to the Finnish parliament?
A: Even if we had a few immigrant candidates in the parliament, that would not solve the problem of an absent, unified immigrant voice. MPs are elected by a general vote, which means that most probably the vote of the Finnish community determines who is elected. In some cases, that could even be damaging to the immigrant community. If, for example, an extremely assimilated immigrant is elected to the Finnish parliament, he or she may be out of touch with the immigrant community, but still considered as representing them. In a worst-case scenario, an anti-immigrant person, with an immigrant background may be elected. This person could attack the immigrant community and still be protected because of his ethnic background.
This nonsense needs to be given the short arm it deserves, but, you know as well as I, feckless politicians will seek how to best exploit the IPF to their own advantage. What a joke. KGS

Immigrants in Finland will soon be entitled to choose 50 representatives for a planned “Immigrant Parliament of Finland”. The first elections for the body will coincide with next year’s elections of the Finnish Parliament.
Founders of the Immigrant Parliament say that the planned body will be the first in the world. It has no official status in Finland, but organisers hope that it could influence public opinion.
The aim of the body is to give a voice to immigrants in the Finnish immigration debate.
The father of the idea, Alexis Kouros, sees the parliament as a politically and religiously independent body.
“So far, the debate has been a monologue of the dominant population. The Parliament will turn it into a dialogue. It is harder to bypass its opinion than that of an individual immigrant”, Kouros explains.
Those eligible to vote in the election of the Immigrant Parliament will be foreigners who have lived in Finland for at least two years, foreign-born Finnish citizens, and the adult children of immigrants.
Candidates for the body must also meet the same requirements.
If each group of immigrants were to vote for their own citizens, the largest national groups in the body would be the Russians and the Estonians. Other large groups include Somalis, Chinese, Iraqis, Thai, and Germans, numbering between 5,000 and 7,000 each.
Those behind the project believe, however, that matters other than ethnic background will affect how people vote.
“We don’t want the Immigrant Parliament to be a place where people only talk about female circumcision. The same things are important to us that are important to others, but we have new points of view”, says Professor Jeremy Gould, one of the founders of the idea.
The aim is not to set up a parallel system to the Finnish Parliament. The goal is to make it easier for immigrants to adapt to Finnish society.
“Immigrants are frustrated. The Parliament eases this frustration by offering a way to affect their own position”, Kouros says.