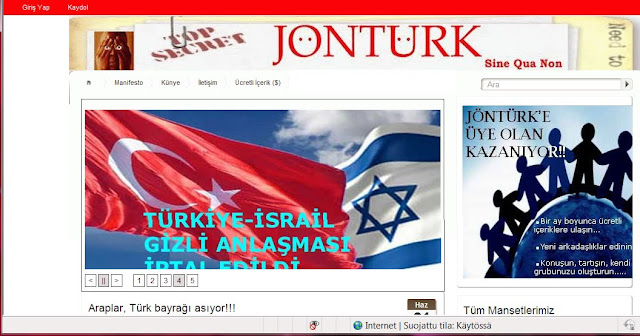 The Tundra Tabloids received the following message from the editor of the Turkish website, JÖNTÜRK,  in relation to the Flottila of the Huns incident. Jon:  “We are getting “deah threat” from unknown sources in Turkey.. Cause we are inquiring into the “Marmara Problem” at jonturk.com…”

After futher inquiry about the details, Jon responds with the following:

“we wrote before the incident that “This Aid Foundation was supported by Recep Tayyip Erdogan, himself..” After the incident we published the guys pics from flotilla with knives and asked “Was it correct to send them there”, “were some of them related to Radical Islamists?” so on…
And yesterday we got the threats by phone.. one of them said all these happened because of people like us in Turkey and we should leave Turkey..He said that he was the Islamist.”

Folks, the radical Muslims, which includes Turkey’s present prime minister, Recep Tayyip Erdogan, are playing for keeps. The radical Islamic Milli Gurus and the pseudo human rights org. IHH, are linked to terrorism, meaning Hamas and other groups in the ME. The Turks are vying for leadership of the Islamic Ummah, in direct competition with the Saudis and Iran. All of what has taken place in thee ast three days has to be viewed under that rubric.
Obama’s actions on the world’s stage has unleashed the destabilizing forces of Islam in the region, and the radical leftism in the West, and now we see them clearly holding hands during this incident. Instead of rage being directed against the Turkish PM, for allowing all this to take place under their guidance, we see all the world’s leaders sending their apologies and condolences to the architect of the whole incident.
And so now a lone Turkish website asking the hard questions the international media refuses to do, finds itself at the brunt end of death threats by fundamentalist Muslims, perhaps we now now why the media is refusing to ask the hard questions. KGS