Skip to content
Home
/
2010
/
May
/
14
/
Uncategorized
/
THE TUNDRA TABLOIDS REPUBLISHES ITS INTERVIEW WITH LARS VILKS…….
Facebook
Twitter
Google+
LinkedIn
Pinterest
The Tundra Tabloids republishes this interview it did of Swedish artist Lars Vilks in Stockholm in Nov.2008, at the behest of Vlad Tepes, not only because the subject material is relevant, but becuase here in the interview the artist mentions the first act of violence directed towards him and his art project. Pretty stunning stuff in light of what has recently occured in Uppsala Sweden. The TT wishes Lars Vilks all the best and to keep his lamp burning brightly. KGS
Tundra Tabloids: Greetings to everybody, I am sitting here with Lars Vilks, who has just held an event in Stockholm, translated from Swedish, “A Day For Freedom of Speech”, would that be correct?
Lars Vilks: Yes
Tundra Tabloids: First of all, for those of you who do not know of Lars Vilks, he is a Swedish artist who has a doctorate in art history from Lund University and has taught at the Oslo National Academy of the Arts, as well as being a professor of art theory at the Bergen National Academy of the Arts. Now, Lars thank you for doing this interview, I really appreciate the time…
Lars Vilks: I really hope for the best (laughter)
Tundra Tabloids: Right, now first of all, about the event that took place yesterday, could you give me your thoughts or comments on what you hoped to achieve by that…collage of different videos concerning the Mohamed dog cartoon, the roundabout dog, and your answer to your critics?
Lars Vilks: There are many frontiers in this drama, I have one that goes with my main project which is about the art world, and the agenda they have in the art world, and when they do something incorrect, which is very obvious, and I’ve done it just to find out about what is the situation to critique what is the freedom within the art world and this was just one way of protesting, to keep it alive, to kind of follow up with documentation that I’m very well aware of working with this very huge project, as well as everything that happens can be part of the art work. When you make a musical, you make this possible to view.
Tundra Tabloids: Right,
Lars Vilks: You make this a part of a summary, in a kind of an amusing form. I mean, I didn’t expect, and I do not expect, because I haven’t seen any of the reactions yet from that point of view, but I think that it’s too early to have some sort of communication with the art world. So this is an ongoing thing. I have to wait I mean, and that’s the point I think, if it went to fast it wouldn’t be so serious.
Tundra Tabloids: Right.
Lars Vilks: When you crash into some sort of institutional critique and you’re really serious about it, then you, I mean, either you do something which is totally stupid and impossible, or otherwise you really hit the nail and then you have to wait to see what happens. That’s one thing, the other thing of course is what goes on in the world. The world is also fascinated by this, I mean really, it’s mostly with the Arabs with things going on. And that went alright. It was the first bloodshed we had yesterday?
Tundra Tabloids: Oh yeah…
Lars Vilks: It was the first bloodshed?
Tundra Tabloids: Yes it was.
[The Local: When Vilks stood to address the several hundred people gathered in the ABF building in Stockholm, a young woman rose to her feet, made threatening gestures with her key ring and screamed at the artist. One of the debate’s organizers seized the woman in order to escort her from the premises. “She then scratched her keys over his underarm, cutting him in two places,” said Filip Björner for the event’s organizers, the Swedish Humanist Association.] 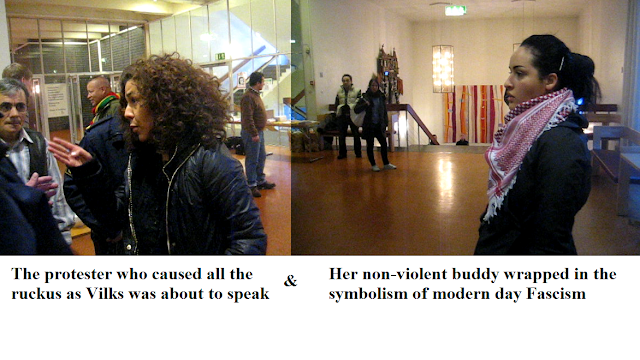