Former US General Warns of Chemical Attacks Against Israel

Potential Hezbollah offensive includes chemically armed SCUD missiles with a 450 km range, preemptive strikes on air fields, and a wave of tunnel attacks that cross from Lebanon into Israel. 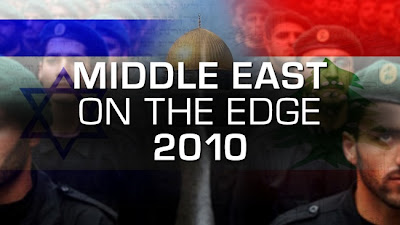 Click here to view the interview
Via: Power Line Blog
Make sure to read Caroline Glick’s latest, a portion of it is included below. This goes hand in hand with the exclusive report the TT ran last week, The Patron of Lebanon is spot on in his observations and choice of sources, somethin big is happening in Lebanon and the sh*t is going to soon hit the fan. KGS

Time to prepare for war

So much for US President Barack Obama’s famed powers of persuasion. At the UN’s Nuclear Non-Poliferation Treaty review conference which opened this week, the Obama administration managed to lose control over the agenda before the conference even started.
Obama administration officials said they intended to use the conference as a platform to mount international pressure on Iran to stop its illicit nuclear proliferation activities. But even before the conference began, with a little prodding from Egypt, the administration agreed that instead of focusing on Iran, the conference would adopt Iran’s chosen agenda: attacking Israel for its alleged nuclear arsenal.
Last week the Wall Street Journal reported that US officials were conducting negotiations with Egypt about Egypt’s demand that the NPT review conference call for sanctions against Israel for refusing to join the NPT as a non-nuclear state. The Journal quoted a senior administration official involved in the discussions saying, “We’ve made a proposal to them [Egypt] that goes beyond what the U.S. has been willing to do before.”
Among other possibilities, that proposal may have included a US agreement to appoint a UN envoy responsible for organizing a UN conference calling for the Greater Middle East to become a nuclear-free zone. In diplomatese, “Middle East nuclear-free zone” is a well-accepted euphemism for stripping Israel of its purported nuclear capability while turning a blind eye to Iranian, Syrian and other Islamic nuclear weapons programs. Egypt’s demand, which it convinced more than a hundred members of the Non-Aligned bloc to sign onto, is for Israel to open its nuclear installations to international inspectors as a first step towards unilateral nuclear disarmament.
On Wednesday the US joined the other four permanent members of the Security Council in signing a statement calling for a nuclear-free Middle East and urging Israel, Pakistan and India to accede to the NPT as non-nuclear states. Following the US’s lead, on Thursday Yukiya Amano, the new Director General of the International Atomic Energy Agency wrote a letter to IAEA member states asking for their suggestions for how to convince Israel to sign the NPT.