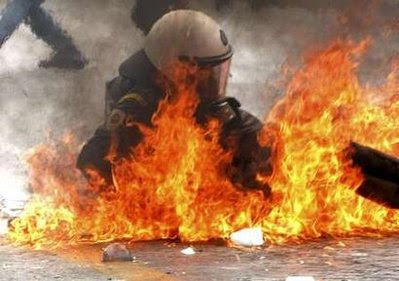 Greek socialist
bureaucracy at work
The Tundra Tabloids is for the complete dissolving of the Euro and with the Greeks getting not one dime from the rest of Europe. If they need money, and they do, then act like the private sector and start selling off their assets, like land, such as islands etc. The US gained Alaska and Louisiana through similar means, the Greeks can start paying off their debts by selling off parts of Greece.
If the Finns actually hand over 1.5 billion Euros to the Greeks, money that the Finnish government has to borrow in order to lend, then it means that each Finn (pop. 5.2 million) is personally handing over 1000 Euros to the Big Fat Greek Government in order to prolong the largess that the Greeks have become accustomed to.
The Finnish tabloid, Ilta-Sanomat, just published the other day an accounting of Greek largess that’s considered a national right, like giving bonuses (up to 1300 Euros) to bureaucrats for using a computer, or for coming to work on time, or for knowing another language. People working in the forest industry get extra pay for working outdoors.
Everyone working in the “public sector” receive 14 months of pay per year. Officials receive for Christmas a whole extra month in wages. Daughters of bureaucrats who are either unmarried or divorced, receive the pension of their dearly departed fathers, 40 000 currently are doing so to the tune of 550 million a year. Retiree pensions suck up annually 12% of the Greek domestic production, while the EU average is around 3%. Greek bureaucrats can’t be fired, and they can retire at the age of 50.
The Big Fat Greek Government shells out money to cover the debt ridden airline of Olympia, that allows family members of employees to fly around the world for free. State committees are founded and people paid to run them though its unclear what many of these committees actually do. One committee oversees the Kopais Lake though the lake dried up during the 1930’s. According to the Ilta-Sanomat, these committees employ around 10 000 people which sucks up around 220 million Euros a year.
Clearly we shouldn’t be shelling out money to the Greeks that have grown used to sucking at the government’s teat, and are in overwhelming numbers against any of the budget cuts being planned by the EU states loaning the Greek government money. Time to end the farce and face the music, no matter how painful. KGS

NOTE: Please do take note that when its the “publicly approved kind of socialists” (as opposed to the ultra-nationalist socialist Fascists) doing the rioting burning and murdering, there is the noticeable effort to explain the their “violence and victim hood”.

ATHENS, Greece (AP) – Rioting over harsh austerity measures left three people dead in a torched Athens bank and clouds of tear gas drifting past parliament, in an outburst of anger that underlined the long and difficult struggle Greece faces to stick with painful cutbacks that come with an international bailout.
The deaths were the first during a protest in Greece in nearly 20 years.
Fear that the bailout won’t stop the debt crisis from spreading to other financially troubled EU countries like Portugal and Spain intensified amid the violence Wednesday, as credit ratings agency Moody’s put Portugal on watch for a possible downgrade.
The euro sank, dipping below $1.29 for the first time in over a year, on fears of crisis contagion and concerns that political upheaval might keep Greece from keeping its end of the bailout bargain.
Greece faces a May 19 due date on debt it says it can’t repay without the help. The new government cutbacks, which slash salaries and pensions for civil servants and hike consumer taxes, are being imposed as condition of getting a euro110 billion ($142.16 billion) package of rescue loans from the International Monetary Fund and the other 15 European Union countries that use the euro as their currency.
Many Greeks realize some cutbacks are necessary to pull their country, which has a massive debt of euro300 billion ($387.72 billion), back from the brink of default, and reaction until now had been relatively muted by Greece’s volatile standards. But with people beginning to feel the pain of austerity measures, anger boiled over.