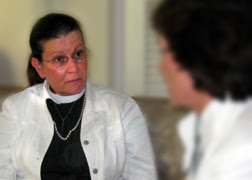 Rev. Wilifred Allen-Faiella, Florida:
I want social justice for pedophiles and
for supporters of fundamentalist Islam, CAIR
According to a Tundra Tabloids’ source who knows more details about the principle character in this story -the Reverend Wilifred Allen-Faiella of St. Stephen’s Episcopal Church in Coconut Grove- has this to say about “the Rev”: “This pastor is particularly nasty – she also destroyed the old church on the site of her new church, after promising she wouldn’t, in order to expand a “green” extension of the school”.
So the Reverend Allen-Faella can’t be trusted to keep her word to her parishoners, but can be counted on to allow a convicted pedophile “to volunteer at the thrift shop next to her church’s K-6 elementary school.” This “social justice” minister who is considered “intransigent and unresponsive” by a great number of people in her parish in regards to her defending the volunteer pedophile, apparently has no problem in being totally responsive to the whims and needs of the Hamas/Muslim Brotherhood front group, CAIR, the Council on American Islamic Relations:

“As a minister of the Gospel of Jesus Christ who preached love for all I am appalled that a Congresswoman (Congresswoman Sue Myrick) can support a hate-filled group such as “Act for America”. Their statements about Muslims constitute hate speech and no responsible leader of this country founded on the principles that all are created equal should associate herself with such an anti-American group.”

Anybody spot something wrong with this picture? The Reverend Allen-Faella, when push comes to shove, cares more about her Leftist ideology than the concerns of her own Christian parishoners, and then takes sides with a widely known Islamic terrorist front group CAIR, (which has been shown to be in violation of US law in regards to the Foreign Agent Registration Act) in a smear campaign against ACT! for America, “one of the largest national security (and pro-American and pro-Israel) citizens organizations in the United States, as an “anti-Islam hate group.”

Adam Savit, over at Breitbart’s Big Government, has the goods on both the Rev and CAIR, in an interesting article that blows the lid on these two characters who are trying a blue smoke and mirrors smear operation against Congresswoman Sue Myrick (R-NC) and the ACT! for America organization. Please read on. KGS

The Pastor, the Pedophile and CAIR

On April 5 the Council on American-Islamic Relations (CAIR) issued a press release urging GOP leaders to “insist” that Congresswoman Sue Myrick (R-NC) withdraw support from the non-profit grassroots advocacy organization ACT! for America. CAIR referred to ACT! for America, one of the largest national security (and pro-American and pro-Israel) citizens organizations in the United States, as an “anti-Islam hate group.”
As we at the Center for Security Policy have reported previously at Big Government, we believe – with the backup evidence to prove it at CAIRObservatory.org – that CAIR has been operating as an unregistered foreign agent, as defined by the Foreign Agents Registration Act (FARA). FARA § 611 (o) states that foreign agents who engage in any activity to “influence any agency or official of the Government of the United States or any section of the public within the United States” must register as a foreign agent and report such activity to the Department of Justice. Therefore as Rep. Myrick and GOP leaders are “officials of the government of the United States,” CAIR’s attempt to influence their conduct and associations in this way is a clear violation of the FARA statute.