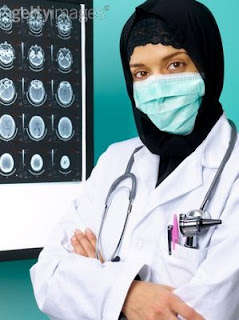 Muslima Doc: When it comes to health care
allah the moon god comes first, not the patient
Remember folks, the NHS recently deemed a nurse’s crucifix as a health risk and denied her the right to wear it as she wanted, but not so for the Muslim, nope, they get their wishes catered to while the rest have to abide by the rules, even though it goes against common sense rules meant to stop the spread of dangerous bacteria.
The Tundra Tabloids advises any patient in a British hospital where a Muslim female nurse or doctor tried to interact with her arms covered, they should immediatly refuse her assistance and demand a properly clothed health staff. This shows the true nature of these observing Muslims who demanded the “opt out” option from the strict dress code, they care more about their ideology than about the patient. It ‘s the way they think. KGS

Muslim doctors and nurses are to be allowed for religious reasons to opt out of strict NHS dress codes introduced to prevent the spread of deadly hospital superbugs.
The Department of Health has announced that female Muslim staff will be permitted to cover their arms on hospital wards to preserve their modesty.

This is despite earlier guidance that all staff should be ‘bare below the elbow’ after long sleeves were blamed for spreading bacteria, leading to superbug deaths.
The Department has also relaxed its ‘no jewellery’ rule by making it clear that Sikhs can wear bangles, as long as they can be pushed up the arm during direct patient care.

The move contrasts with the case of nurse Shirley Chaplin, who last week lost her discrimination battle against Royal Devon and Exeter Hospital Trust, which said the cross she has worn since she was 16 was a ‘hazard’ because it could scratch patients.