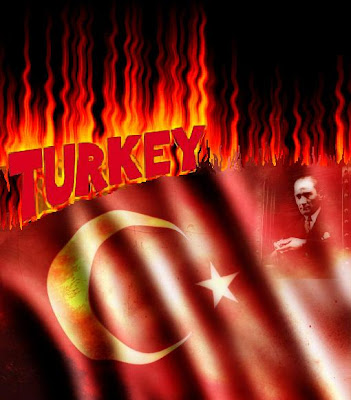 The OIC and the Turk the heads it are evil. Turkey, the once moderate Muslim state (as moderate Muslim states go) has jumped into the abyss, with Kemal Ataturk’s dream of a successful secular Turkish state having gone up in smoke. Traditional Islam rules the day, with known bigot and anti-Semite, Ekmeleddin Ihsanoglu, kneeling in prayer with a genocidal monster like Omar al-Bashir.

Turkey has gone Muslim in a serious way, and yet deluded Europeans (including Finns) rush there to spend their cash in that “moderate” Muslim state, that still serves alcohol and allows the mixing of the sexes. Well it’s only a matter of time before all that comes to and end. Hopefully that end happens long before they’re membership into the EU is seriously considered. KGS

VIA: Sheik Yer’Mami: Islam Watch: Islamic apologists have long flaunted Turkey as a shining example of Islam’s compatibility with secularism and democracy, but the current pro-Islam regime is slowly turning the country toward Islamic theocracy, which now stands at a point of no return…

United in Genocide & Denial: Sudanese Mass Murderer Omar Hassan al-Bashir & OIC Sec.Gen Ekmeleddin Ihsanoglu who is leading the jihad against free speech in Europe
With the arrest on February 22, 2010 of dozens of former high level Turkish military officers, it is now seemingly certain that there will be no stopping the eventual re- Islamization of Turkey and the adverse consequences cannot be overestimated. Turkey’s Prime Minister, Recep Tayyip Erdogan, and his AK Party are now virtually assured that Turkey’s military will no longer be able to interfere with the Islamic dream of bringing Turkey completely back into the Islamic fold. We have already seen Turkey cancel cooperative training relations with Israel?s military and such slights are merely the tip of the iceberg. 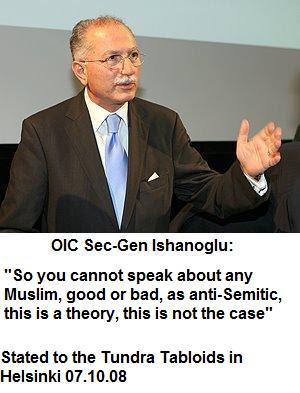