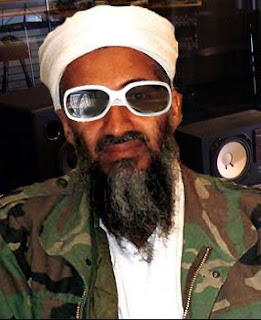 Bin-Laden: Touch KSM and I’ll double kill you
The Tundra Tabloids is reminded of the doughy headed Leftists and other assorted apologists for Islam, who  warn Western policy makers about the dangers of radicalizing the already radicalized “Arab street”. So here is Bin-Laden (or the ghost of Bin-Laden) saying pretty much the same thing:

“We who are currently trying our best in killing as many of you infidel Americans as possible, warn you not execute the man who’s the architect behind 9/11, or we’ll kill you.”

No matter what we did or didn’t do in the past, are currently doing or yet to do in the future, matters very little to the jihadists, they will carry out their agenda of murder and mayhem for their allah’s glory regardless of our actions. KGS
NOTE: The Hamas and other assorted jihadi terrorists waging their religious war against the Jewish state of Israel work along the same lines of logic. They are committed genocidal maniacs and regardless of what policy Israel has had in the past, present or future, they will do their best to kill Jews and destroying Israel. It’s us in the West that have to wrap our minds around what the Israelis have come to know for a long time, there is not co-existence with genocidal, religious supremacists. Get it?