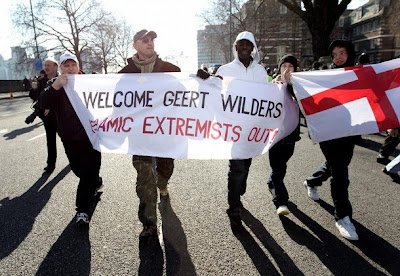 The British anti-Islamization group of the EDL
It doesn’t get any better than this. Those on the Left who aid the Islamization of the West, you know, sharia socialists, are the lowest of the low in society. Max Blumenthal happens to be one of those sharia socialists who would like nothing better than to shut the Counterjihad down.
So Max has now took aim at Pamela Geller of Atlas Shrugs, trying to paint her as supporting anti-democratic “racist and fascist” organizations like the EDL. Max Blumenthal gets his butt kicked by Geller from one end of the internet to the other. Enjoy:

“The effete leftist elites who are so tough and brave behind a keyboard, where they can spin the most outrageous smears and libels, are tiny spineless, gutless wonders in real life. Did you see Max Blumenthal’s piece coming to the defense of his girlfriend Father Death, aka Ben White, (a vile anti-semite) and against the EDL?
Has Max Blumenthal ever done a righteous thing in his whole ugly, wretched life? Ever? He is a destroyer, with no concern for facts, ideas, work. Blumenthal is evil. Ayn Rand said, “Evil, not value, is an absence and a negation, evil is impotent and has no power but that which we let it extort from us. I saw that evil was impotent—that evil was the irrational, the blind, the anti-real—and that the only weapon of its triumph was the willingness of the good to serve it.”

Andrew Breitbart has his number and ripped him a new one in the below video at CPAC. Frankly he went too easy on him.

Check out mad max here: So Who Are The Nazis? Meet Atlas’s Thugs
Apparently Blumenthal’s nose went out of joint when I outed his bitch, Ben. They whined like little girls when I called out White on his vile incitement to genocide and Jew hatred. Man, they shovel it out in big steaming piles, but they cannot take being called on it

Read it all here!