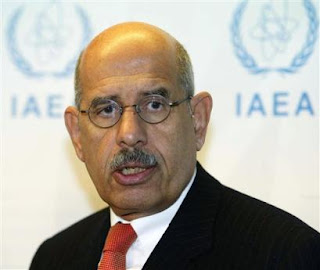 Mohamed ElBaradei
IAEA poster boy for UN jokesters who coddle rogue regimes
So a corrupted former UN bureaucrat official wants to create “change” in the corrupted Egyptian political system. Well, that’s bound to work out nicely isn’t it? Yeah, lets see how well El-Baradei does in reforming the Egyptian political arena so that the Muslim Brotherhood gets even more of its members seats in the parliament. KGS

CAIRO (AP) – The ex-U.N. nuclear chief who has emerged as an opposition leader in Egypt warned Saturday that the long-ruling government could face a popular uprising if it doesn’t respond to appeals for change.
Mohamed ElBaradei, who returned to Cairo a week ago to a hero’s welcome by supporters who see him as a possible rival to President Hosni Mubarak in upcoming elections, told The Associated Press that he hopes to create a peaceful public movement pressing for electoral reforms.
ElBaradei said Egyptians are desperate for change. When asked if Egypt’s government could face protests like those that broke out in Iran, he said he hopes to avoid that but it was ultimately up to the ruling system.
“It is inevitable that change will come to Egypt. What I’m trying to do is pre-empt a point of clash between the government and the people,” he said in an interview in the garden of his home on the outskirts of Cairo.
[…]
Supporters hope that ElBaradei, a civilian with international stature and untouched by corruption tainting the Egyptian system, will be able to seize the momentum and build a following to force the government to change.