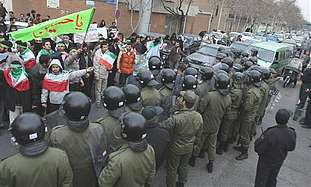 Iranians practicing for the big day of February 11?
Don’t even think for a moment that this was some sort of spontaneous eruption of dissent, this attack was orchrestrated by the higher ups in the Iranian regime. Berlusconi is a proud supporter of Israel and therefore, that alone is enough for him to be hated.

Italian Embassy in Iran attacked by dozens of protesters

Teheran reportedly summons Italian envoy to protest Rome’s decision to scale back economic dealings with Iran, push for tighter sanctions; protests also held outside French, Dutch embassies.
About 100 Iranians protested Tuesday in front of the Italian embassy in Teheran, shouting “Death to Italy, Death to Berlusconi, ” Italy’s foreign minister said. Protests were also held outside the French and Dutch embassies.
The protests came a week after Premier Silvio Berlusconi announced — in Israel — that Italy was scaling back its economic dealings with Iran and wanted tighter sanctions against the Teheran leadership. Italy has long been Teheran’s biggest trading partner in the EU.
Television footage of the protests shown on Sky TG 24 showed protesters throwing stones and eggs at the Italian embassy. Foreign Ministry officials said none of the protesters managed to get inside and that police intervened.
Frattini told the Senate that the protest was “hostile” and that the group tried to assault the building.
The Italian news agency ANSA, citing unidentified sources, reported Tuesday that the Iranian Foreign Ministry had summoned the Italian ambassador to protest Berlusconi’s remarks in Israel.
Iran’s semiofficial Fars news agency reported that a group of university students had gathered in the afternoon at the gates of the French and Italian embassies, which are next to each other in downtown Teheran.
The students hurled eggs and tomatoes at both buildings and denounced what they said was Italian and French support for Iran’s opposition movement, the report said.
The protesters demanded Iran scale back its relations with both countries and they shouted the word “takeover” in a reference to the 1979 student takeover of the US Embassy.
Read it all here.