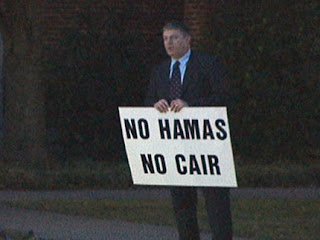 Oklahoma lawmaker Kevin Calvey
They may fool the average person due to the Lame Stream Media’s handling of the PR for this group of hard core Muslim fundamentalists, but the mask is being ripped from its face. That lawmakers are braving to make an open stand against them is a great development. This guy gets it. KGS

NORMAN, Oklahoma — A Muslim advocacy group with a chapter in Oklahoma City is being criticized for having ties to terrorist organizations.

For the past year the Council on American-Islamic Relations, known as CAIR, has been a growing concern for lawmakers in Washington. Legislative leaders have claimed the Muslim group has been helping to funnel money to terrorist, a sentiment that is now starting to be felt in Oklahoma.
In an effort to shed light on the Muslim organization, protestors with Oklahomans Against CAIR Hate demonstrated outside OU’s Meacham Auditorium. That is where CAIR showed a documentary Saturday night on Islam.
“We wanted to educate the people coming here that CAIR has terrorist ties. We are really concerned because they don’t want to admit that,” said Cindy Crenshaw, who was protesting CAIR Saturday.
Razi Hashmi, the Oklahoma executive director for CAIR, said the allegations of terrorist ties are false and said he hoped the protest would help to create better dialogue between the two-sides.
One of the protestors was former Oklahoma lawmaker Kevin Calvey and current candidate for the state’s 5th District. Calvey said he has the proof that ties CAIR to terrorist organizations.