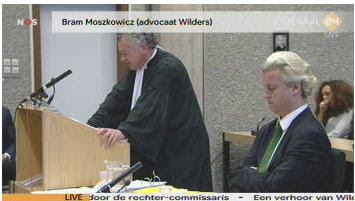 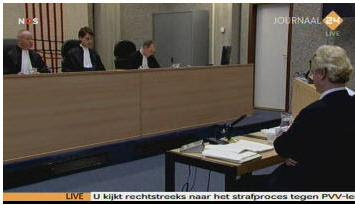 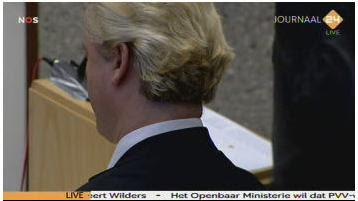 These pics are taken during the (still at the time of this posting) the ongoing court hearing in Amsterdam. Geert Wilders’ lawyer, Bram Moszkowicz mentioned Wafa Sultan and quotes from her book, A God Who Hates, mentions then, Andrew Bostom, and quotes from his book the Legacy of Islamic Antisemitism, mentions Robert Spencer, and quotes from his book The Truth About Mohammed.
UPDATE: Baron Bodissey sends the TT the following translation from his Flemmish translator VH.
“You Are Living in an Islamic Country, My Friend”
“If you cannot say that the Islam is a backward religion and that Muhammad is a criminal, then you are living in an Islamic country, my friend…”
Metro: Interview with Law Professor Afshin Ellian.
The trial against Geert Wilders has begun. The PVV leader will prosecuted for incitement to hatred, discrimination, and insulting Muslims. The trial makes Law Professor Afshin Ellian think of the judicial process in dictatorships like Iran, the country Ellian had to flee from on his seventeenth birthday because of his political views. “No matter what, Wilders will be the winner of this trial.”
Geert Wilders calls his prosecution a political process. Does he have a point here?
“This process has the appearance of a political process. I say: the appearance, because in reality the Public Prosecutor does not do politics.”
A political trial suggests influencing by politics. Where do you see that?
“This is a limited interpretation of the term. A political trial means that someone is persecuted for his political views. This is the case here. Moreover, the Public Prosecutor’s office is part of the Ministry of Justice. It receives instructions from the minister.”
But the judiciary is independent.
“That is a typical argument of a lawyer: Wilders may be acquitted. Now, going to court is daily matter for lawyers, but quite a load for a citizen: you must go there, you must inform yourself, in short: it takes time. For a parliamentarian this means that he cannot properly perform his normal duties.”
It is said of Wilders that he will only benefit from this trial. What do you think?
“I think Wilders will certainly benefit of this process. But we cannot blame him: he has not prosecuted himself.”
Who else will gain advantage from it?