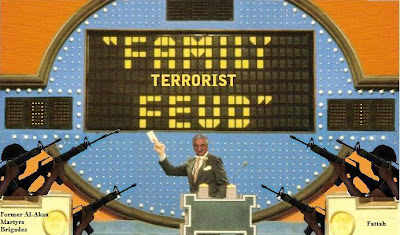 Feuding over the ‘when and how many’ Jews to murder
The Fattah is different from that of the Hamas, but only in the timing and strategy of emptying Israel from its Jews. Both would like nothing better than to murder them all. Here is an interesting view into the self defeating strategy of emptying prisons of jihadis.
The Washington is in the process of emptying Gitmo while claiming that keeping it open leads to more terror, and J’lem sees one of its Rabbis murdered by a jihadi it recently released from prison. Oh, and one of them signed a statement that he would no longer commit any acts of terror in the future.
Tell that to the wife and children of the murdered rabbi, I’m sure that it won’t be of any comfort to his family that the state did it in their best interests. Also take note of the use of roadblocks in frustrating the jihadis, it’s these same roadblocks that the pacifists and anti-Israel Jew haters want to see opened, and the murdered Jews as a result,…be damned. KGS
Possible Fatah terror splinter group
The defense establishment is concerned that Iran and Hizbullah are gaining more influence over terrorist elements in the West Bank and are working to create a splinter and more radical Fatah terrorist group to carry out attacks on its behalf, The Jerusalem Post has learned.
One example was the shooting attack two weeks ago in the northern West Bank that killed Rabbi Meir Chai, a father of seven from Shavei Shomron. The attack did not take the IDF by surprise and senior Central Command sources told the Post this week that a drive-by shooting was raised as a potential scenario in assessments held just days before Chai was killed.
What took the IDF by surprise were the identities of the terrorists, all three of whom were killed by the army two days later in Nablus, on December 26.
They were former Al-Aksa Martyrs Brigades operatives who were in their late 30s and early 40s, far older than the average Palestinian terrorist today. One of them had recently been released from an Israeli jail. Another had signed onto the Shin Bet (Israel Security Agency) pardon deal under which the IDF would not hunt him down if he ceased terror activity.
While all three had terror records, the IDF was puzzled what brought them back to engage in terrorism. The assessment now in the defense establishment is that they may represent a new radical faction within Fatah that is upset at Palestinian Authority President Mahmoud Abbas’s decision to reject violence and embrace diplomacy.
The concern is even greater considering that at the same time, Hizbullah and Iran are trying to establish terrorist cells in the West Bank to use for attacks against Israel. They are using money to recruit operatives.
Since the attack two weeks ago, the IDF has beefed up its patrols along West Bank roads, mostly in northern Samaria. In addition, it is erecting more random checkpoints along the roads.
“The idea is to drive the terrorists crazy,” one senior officer explained. “One day there isn’t a checkpoint and the next day it is there for several hours.