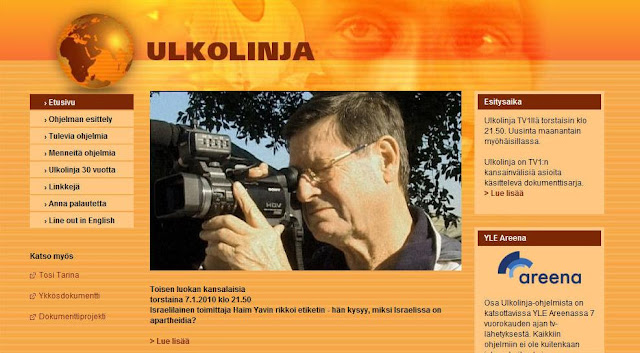 And guess what? They found their man! Chaim Yavin, also known as “the Dan Rather of Israel’s Channel One television station”, recently retired in 2007, and now, after finally shedding his burden of “objectivity”, has taken to the silver screen to publish exactly what he felt all these years, and the antisemites eat it up.

Here is what the mightly relieved YLE Ulkolinja producer, Vesa Toijonen had to say about his lucky find:

“If a European journalist used the word apartheid, the Israeli government and the friends of Israel would automatically claim it to be antisemitism, but Yavin can’t be blamed for it. He’s above any such name calling, says Ulkolinja producer, Vesa Toijonen.”

How lucky for the Finnish producer at YLE, he and his team of Israel bashers can hide behind the retired Israeli version of “Dan Rather or Walter Cronkite”, without having to fear about a deluge of phone calls or emails, “it’s a Jew, an Israeli Jew no less that’s doing the bashing”! It’s schmucks like Yavin that make the job of the antisemites that much easier. These are the only Jews the antisemites like, the useful stooges. KGS

Kumitonttu: “During the time Finland was making its nationality in concrete by creating an independent nation of Finns, that is Finland, there were thousands of Finns who opposed the idea. Several decades later there still were a huge amount of Finns, who wanted to destroy Finland – persons like Otto Wille Kuusinen to name the most Famous one. After the second Wolrd War, there were people, mainly communists, who still continued the same ideology. Currently many consider the multi-cultural -ideology aims the very same goal.
Does that mean, that we are not allowed to call such persons anti-Finnish? We have a strong Finnish identity, and people, whether they’re bolsevists like Stalin and Brezhnev or communists like Aarne Saarinen and Esko-Juhani Tennilä, can be called anti-Finnish. So why can’t we call those Jews who oppose the idea of an independent Jewish Israel as anti-Semites? Is there any logical reason to that? “