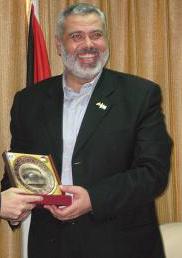 Haniyah: I keep speaking my mind
yet the Europeans want to do business with me
This was the strategic mistake Ariel Sharon made when he decided to remove every Jew from the Gaza Strip, without exacting any concessions from the Arabs, “the move”, only served to wet their appetites for more. Don’t kid yourselves, they need this conflict, the Fattah as well, to keep the pressure on Israel to relinquish every bit of soil it currently sits on. KGS

In a long, defiant speech on Monday afternoon, Hamas Prime Minister Ismail Haniyeh said that gaining control of the Gaza Strip was “just a step toward liberating all of Palestine.”
“This movement liberated the Gaza Strip with the help of the militant factions,” said Haniyeh, referring to terrorist groups operating under the umbrella of Palestinian resistance.
“Brothers and sisters, we will not be satisfied with Gaza,” he declared. “Hamas looks toward the whole of Palestine.”
Israel Radio quoted Hamas sources as saying that captured IDF soldier St.-Sgt. Gilad Schalit would only see the light of day when Israel acquiesces to the terrorist group’s demands and frees the prisoners whose release it has demanded.
Tens of thousands of Hamas supporters thronged downtown Gaza City Monday to mark the 22nd anniversary of the group’s founding. Gaza was decked out in Islamic green, with Hamas flags fluttering from rooftops, lampposts and cars. Some parents dressed small children in combat fatigues and green Hamas headbands.