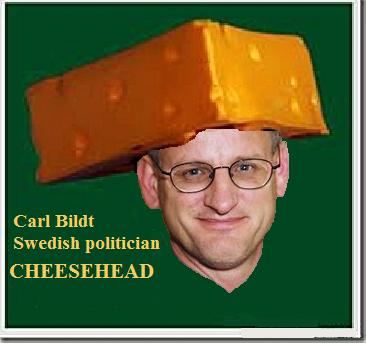 SWEDISH FM CARL BILDT:
IN AN ELECTION YEAR YOU CAN EXPECT SWEDEN TO
TREAT OUR FELLOW DEMOCRACY ISRAEL EVEN MORE LIKE CRAP
The Tundra Tabloids’ lead article was going to be from the J’lem Post, but after reading Ilya Meyer’s lastest entry to his blog highlighting Sweden’s recent political skullduggery at Israel’s expense, it’s much wiser to start from Ilaya Meyer’s story first.
Sweden, which currently chairs the EU presidency has made headlines recently concerning a draft that’s been floating around that would seek to divide Jerusalem and declare a unilateral Palestinian state. Yes the Swedish government is that devious. Though the draft was just one of many, nonetheless, such an intiative would be in line with traditional Swedish duplicitous political behavior.
For an example, Sweden’s political elites see no problem at all in demanding Israel to both, recognize and negotiate, with proven racist, genocidal supremacists, but domestically, insist upon a cordon sanitaire  against the Sweden Democrats, who happen to openly pro-Israel. Hmmmmm.  KGS
Swedish Foreign Minister Carl Bildt is using the EU to buy votes in Sweden’s 2010 elections.

In several cities throughout Sweden, several hundred vehicles cars have been set alight by “disaffected” youths of what is euphemistically known as “Middle East origin” in what the youngsters themselves term their Swedish intifada. Here’s what Swedish Radio, Tundra Tabloids and English-language Swedish daily The Local (here, here and here) have to say on the subject.

[…]
Sweden’s government-funded aid agency SIDA is under investigation for fraud following years of massive funding of various Palestinian, Islamist and other “charities”, including some engaged in terrorism and racist indoctrination. SIDA is currently being audited for gross overspending of its budget.
But Swedish Foreign Minister Carl Bildt is way too busy to deal with any of this. He’s busy using the 27-member EU forum to push through his pet project: in the very year that marks the 20th anniversary of the reunification of Berlin, Bildt is pushing the EU to adopt a resolution demanding the partition of Jerusalem. One part will become what he does not recognise as the capital of the Jewish state of Israel, while the other part will be forcibly converted into the recognised capital of the ethnically cleansed state of Palestine. Ethnically cleansed of Jews, that is, along the lines demanded and already achieved in Gaza. As Bildt doubtless knows, about 20 percent of the population of the Jewish state of Israel is made up of Arabs. He is perfectly happy with the glaring inconsistencies.
Carl Bildt simply does not dwell on such niceties. He has other things on his mind. Elections will be held in his country in less than a year. With his party’s popularity not so much flagging as sagging, he needs a miracle to stay in power and continue strapping on his nosebag with the weaker-minded see-no-Islamists people currently heading some of Europe’s nations.
With something like half a million Muslims living in Sweden – but fewer than 18,000 Jews – he needs to work an electoral miracle. Hence his Jerusalem obsession. It’s a guaranteed vote-clincher.
With every new sign of weakness and uncertainty, Islamism storms ahead. But don’t take my word for it, watch the following film featuring a former Islamist extremist. His message in a nutshell: Don’t back down. Maintain your humanity and do whatever you need to preserve your civilised norms as a modern society but don’t ever back down or offer concessions in the face of Islamist aggression – you’ll only pay the price later.