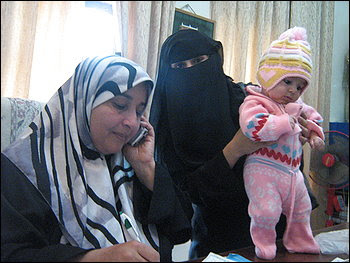 Do I hear a bid of two goats or one camel?
The Washington Post article dutifully presents the perverse practice of allowing child brides, as a “cultural thing”, but lets face it, if it indeed were just a cultural thing, the practice would be that much easier to do away with. Since the false prophet of Islam is accredited with being the supreme example of human behavior, and that anything he did, can and will be, copied, the demand for child brides will continue, even in secret if need be. KGS

SANAA, YEMEN — Ayesha rested her head on the doctor’s desk. She had removed her black veil, revealing a round face contorted in pain. She had married a 53-year-old man when she was 13. Now 15, she wanted her childhood back. She clutched her sides and groaned.
It was 3:30 p.m. in Arwa Elrabee’s office. The gynecologist looked at Ayesha and shook her head. She knew Ayesha’s pain was as much psychological as it was physical.
“I don’t want to be married,” Ayesha explained, her mother standing next to her.
“Why did you marry her off so early?” the doctor demanded. “Why didn’t you allow her to continue her education?”
“It wasn’t me. It was her father,” Ayesha’s mother replied. “He wanted to marry her off.”
Yemen has no minimum age for marriage, and girls as young as 8 are often forced to wed. Many become mothers soon after they reach puberty. The country has one of the highest rates of maternal mortality in the world. The death of a 12-year-old in childbirth this fall highlighted the health risks.
Child brides and young mothers are the most vivid manifestations of how tribal doctrines prevail over modern attitudes in the Middle East’s poorest country.
The only place many young women here can vent their frustrations is among other sympathetic women, such as Elrabee, a former deputy health minister who has tried to alter perceptions about early marriages.
“Hopefully, my life will get better, God willing,” Ayesha said.
“Life. This is the life,” said Elrabee, as she watched Ayesha and her mother leave, dark blurs floating through a tangle of other black-clad women,