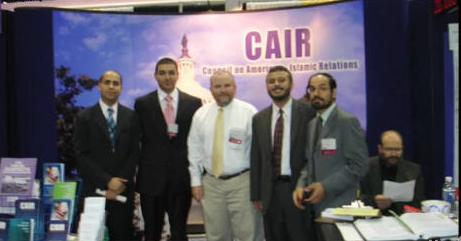 If you listen closely, you’ll hear the sound of the other shoe dropping. Not only has the ground breaking book by Dave Gaubatz, The Muslim Mafia,  thrown the door wide open (wide enough to drive in a Grey Hound bus though) on the secretive CAIR organization’s anti-American activities, there is also another serious allegation developing concerning CAIR’s involvement with the Iranian government.

In what can only be described as a “Keystone Cop” run organization, CAIR, the Council on American Islamic Relations, has once again been caught with its pants dangling around its ankles, in what appears to be a gross violation of US regulations that restrict any US organizations’ involvement with the Iranian regime.
The CAIR Lair of Liars have shown an arrogance not seen since the days of the gangsters in the roaring 20’s and 30’s, and that same arrogance, which the led to the downfall of the Italian Mafia, and will most likely lead to their own undoing as well.
The difference between the two mafias of course, is not just the religion, The Italian mafioso corrupted America for their own aggrandizment, the Muslim Mafia on the other hand, corrupts American politicians for Islam, working steadfastly for the replacement of its constitution with sharia law. Their sole reason for existing is to spread treason, which makes CAIR an even more dangerous organization than their Italian countrparts could ever be. Please read what Frank Gaffney, from the Center for Security Policy has to say about the latest intrigue concerning CAIR receiving funding from the tyrannical Iranian regime. KGS

On November 12 2009, the federal government moved to seize four mosques and a New York City skyscraper owned by the Alavi Foundation, a group allegedly under the direct control of the Iranian government. The following day, the Washington Times exposed the National Iranian American Council (NIAC) for allegedly lobbying on behalf of the Iranian government in violation of the Lobbying Disclosure Act and the Foreign Agents Registration Act. We believe that a third U.S.-based group may be guilty of illegal ties to Iran under the Iranian Assets Control Regulations: the Council On American-Islamic Relations (CAIR).
On November 18, 2006 and November 23, 2008, CAIR held their gala annual fundraisers at the Marriott hotel in Arlington, Virginia. We’ve posted previously that the Interests Section of Iran attended both events. Because the U.S. and Iran do not have diplomatic relations, the Interests Section of Iran, sponsored by the Embassy of Pakistan, functions as the defacto embassy representing Iran’s government.
At the 2008 event, we recorded video of Master of Ceremonies and then CAIR-Tampa Executive Director Ahmed Bedier giving personal thanks to “the Interests Section of Iran” for their support:

And in this 2009 registration form for embassies to purchase tables and ad space in the program at the annual fundraiser, embassies purchasing tables this year were charged $2,500-$3,000. It appears that an exchange of money or at least a transaction of a thing of value did occur between CAIR and the Interests Section of Iran.

And that may have been a violation of the Iranian Assets Control Regulations.