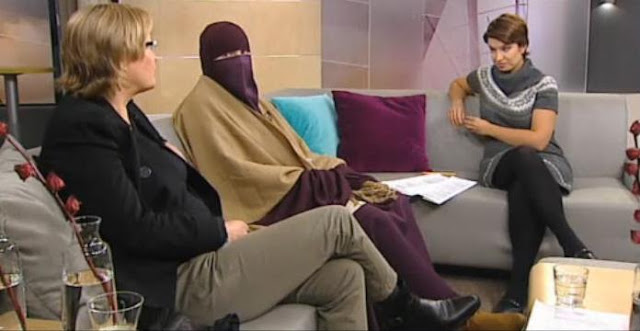 Maryam Elo: I get long stares
You think? The interview was not as bad as one would think, academic from Helsinki University, Susanne Dahlgren, did in fact say that it’s difficult to communcate with someone who is completely covered like the woman sitting next to her, and that the since the 70’s it has become increasingly standardized thoughout the ME. No longer are local traditions reflected in the garments being worn, they are all pretty much of a same or similar style of garment.
Those who follow the Tundra Tabloids knows full well how the TT feels towards burkas, niqabs, they should be banned from the streets of Europe and elsewhere. They are in fact a symbol of oppression of women, as well as being an affront to male dignity. A woman entirely covered reduces the female to being an non-entity, and the male to that of an animal. It sets a wrong set of ideals and values for society in general.
Another strike against the full covering is the fact that it becomes a security risk, and in this day and age of international terrorism, having people floating around in full length bags with their identities concealed, is downright foolish. The hijab, or head scarf, is another article that is difficult to ban in a free society, but private businesses should be free to ban it if it doesn’t mesh with its overall image.
Another alternative to the prickly issue of wearing the Islamofashion in Western society, has been solved by the Tundra Tabloids’s colleague, Eeyore over at Vlad Tepes, he offers the following as a possible solution:
VT: The perfect solution to Islam and gender inequality. A simple, elegant solution. All devout religious Muslims who wish to make their women dress according to the laws of sharia must also wear the same thing. Good for the goose right? Must also be good for the gander.
A one size fits all, practical solution which would allow the women to work at UPS, the men to know that their women are properly covered, a nice shield so that the men are also easily recognizable as devout Muslims in case we encounter them on a bus, train, airplane, military base, on a bycicle with large saddlebags etc. and can take proper defensive action, and although her face is covered, we can still actually identify the person with this suit on. I call it, the ‘Beerka.’ Only Vlad Tepes could “bee” so clever. KGS