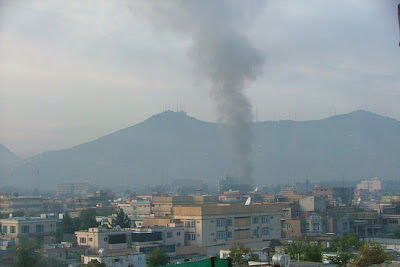 WHAT A MESS!
The Tundra Tabloids hasn’t a clear answer to what course of action needs to be taken in order to get a badly needed calm in Afghanistan, but one thing is for sure, the rats nest of Afghanistan pales in comparison to that of Iraq.
Barack Obama said early on that Afghanistan is the war of neccessity, not Iraq, but the logic behind that line of reasoning fails for many reasons. Afghanistan is a myriad of tribes and fiefdoms that make it next to impossible to find, let alone arrrange, any kind of cohesive society. They all hate each other, just outsiders that much more.

What can’t be allowed to happen, is for the Taliban to appear it has beaten Western allied and NATO forces, and that means empowering non-Taliban chieftans, no matter how corrupt and alligned with the drug trade, in order to stop the Taliban’s successes.

Sounds terrible doesn’t it? But here’s the obvious message here, dictatorships, while not the preferred method in producing some kind of normality in daily Afghan life, is far better than the Taliban’s rule, which would as dictatorial, but would also include not only draconian sharia rule, but would provide a major shot in the arm into the global jihad.

The jihad needs a major defeat, and Afghanistan, like it or not, offers the place to do it, but defeating the jihad is noticeably lacking on the current US administration’s “to do list”. Talking with the Taliban is not what the West needs to be doing, killing the Taliban is what they should be doing, and bribing the rest to play nice. KGS

Taliban suicide gunmen stormed a UN hostel in Kabul Wednesday, killing six foreign staff in an assault the Islamist militia said marked the start of a bloody countdown to new Afghan elections.
At least nine UN staff were also injured as gunfire and explosions rang out across the city in a smart residential district near Butcher Street close to popular shopping streets favoured by Westerners.
Afghan police said the gunmen entered the UN-approved guesthouse in Kabul’s Shar-e-Now district around dawn. Flames and heavy black smoke spewed into the sky as the security services closed off roads and surrounded the building.
The three gunmen were shot dead around 8:30 am (0400 GMT), Afghan interior ministry spokesman Zemarai Bashary said, about three hours after they launched the latest of a series of brazen raids in the heavily guarded capital city.
“Three suicide bombers have been killed during the police operation, they were armed suicide bombers,” Bashary said.