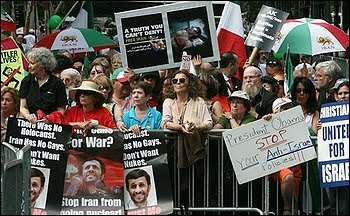 So the other shoe drops with a thud. Iran has been secretly building a second uranium enrichment plant all the while the UN, the IAEA and the West have been fiddling around with their insanely stupid exercize in futility, meaningless dialogue and empty sanctions. KGS
NOTE: The Tundra Tabloids is enquiring from the Finnish Foreign Ministry presently, as to whether or not the Finnish Ambassador to the UN was present during the Mahmoud Ahmadinejad’s speech, in which he denied the Holocaust. The Finnish MFA’s response will be updated to this post.

UPDATE: Hiding behind the skirts of an “EU Common Instructions” Finland’s UN Ambassador, Jarmo Viinanen,  was present at the UN General Assembly during Ahmadinejad’s speech. According to the Secretary for the Finnish Ministry of Foreign Affairs, Katariina Prepula, “Finland was present during the Iranian president’s speech due to following the EU’s Common Instructions”.

But most importantly, there were other EU member states who were issued the same set of cowardly EU “Common Instructions” that chose not to attend the racist speech where Ahmainejad denied the Holocaust.

So once again, the Finnish Foreign Ministry, as they did in Geneva with its participation in the Durban II racist conference, listening to the blather of Ahmadinejad, and now at the UN, the Finns (and Swedes and Norwegians) prove not to be the humanitarians, and anti-racists they claim to be. KGS

PITTSBURGH, Sept. 25 — The government of Iran has told the International Atomic Energy Agency that it is building a second uranium enrichment plant for making fuel, the nuclear watchdog agency said Friday.

President Obama will call attention to the existence of the underground facility in an early-morning statement to reporters here before the opening of the G-20 economic summit in Pittsburgh, and will say that Western intelligence agencies have been tracking the facility for years.
Obama’s statement, which will be made jointly with the leaders of France and Great Britain, was added to his schedule late Thursday night. It comes a day after Obama chaired a United Nations Security Council session on halting the spread of nuclear weapons throughout the world.

Although Obama referred to the nuclear ambitions of both Iran and North Korea during the session, diplomatic maneuvering kept any mention of the two countries out of a resolution that the council unanimously approved. The omission prompted passionate criticism from French President Nicolas Sarkozy, who will join Obama and British Prime Minister Gordon Brown Friday morning to decry Iran’s newly disclosed facility.

“How, before the eyes of the world, could we justify meeting without tackling them?” Sarkozy scolded Thursday, referring to Iran and North Korea. “We live in the real world, not a virtual world. And the real world expects us to take decisions.”

Iran was previously known to have one enrichment plant.

Iran’s Sept. 21 letter to the IAEA stated “that a new pilot fuel enrichment plant is under construction in the country,” agency spokesman Marc Vidricaire said. “The letter stated that the enrichment level would be up to 5 percent.”

Vidricaire said the Vienna-based agency responded by asking Iran to quickly provide more specifics about the facility — “to assess safeguards verification requirements.” He said Iran told the IAEA “that no nuclear material has been introduced into the facility.”