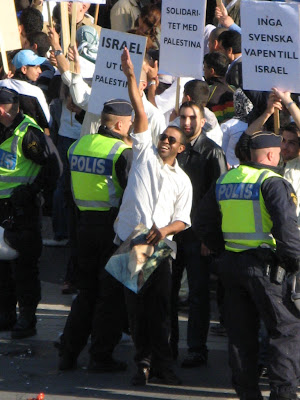 United in hate of Israel and Jews
There was a large demonstration yesterday in the main square in Stockholm, Sweden, (actually its a circle) in which activists for democracy in Iran were protesting against the existing Iranian government, as well as staying on to protest against the pro-Islamist-anti-Israeli demonstration that was assembling in the same area.
What ensued was a shouting match between the two camps of protestors. The Tundra Tabloids visited the same area in which these protests took place, during the Summer, and had a chance to talk with some of these pro-democracy Iranians who had set up their displays in certain sections of Stockholm.
Let’s go to the video tape:
As the TT stated in an earlier post, they are true freedom fighters who not only despise the Islamist regime of Iran and the communists, they also like Israel as well. There was a real display for solidarity with the Jewish state, which is definately at odds with the Fascist Islamist and Nazi sympathisers standing across from them in the square. 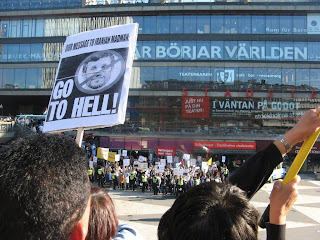 Sergels torg in central Stockholm was sealed off on Sunday afternoon as rival demonstrators clashed.

A demonstration began on the square at around midday to protest against the regime in Iran. At around 2pm a further demonstration began directed against Israel and the two groups clashed in a war of words. “We have had to seal off the square and have to keep the groups apart, there is a tense atmosphere and a lot of verbal abuse being hurled at each other,” Kjell Lindgren at Stockholm police told news agency TT.

“We have redirected traffic heading towards the square as well, there are too many people milling about,” he said. Two people were detained by police and several more were removed after throwing objects at the demonstrators.

“There are around a hundred demonstrators. How many counter-demonstrators standing around the square is impossible to tell as many curious passers-by have also stopped,” Lindgren said. According to media reports the anti-Israel demonstration was continuing on the square at 4.30pm on Sunday.

There are some very interesting aspects to the story of this demonstration(s), because it highlights the nexus that exists between the real Neo-Nazi movement  in Sweden, with that of the Islamo-fascist supporters of “Palestinianism”. Both movements loathe Israel and the Jews which places the Swedish Socialists, from the hard Left to the SDP, in an interesting position of having some very interesting bedfellows.
They simply don’t know how to react to it, as they have shown time and again in closing a blind eye to the rants and raves of anti-semitic outbursts in the streets and in the mosques of Sweden as well. The Tundra Tabloids was sent the following article by a reader who states the following about the swedish Chancellor of Justice, Göran Lambertz, who finds the blood libeling Swedish tabloid paper, Aftonbladet, not guilty of racism:
“It is worthwile to mention that this is not the first time that Lambertz does not want to deal with notorious anti-semitism“.
Swedish tabloid cleared over Israel organ claims

A Swedish tabloid newspaper has been cleared of racism charges by the country’s senior legal official over a story alleging that Israeli soldiers stole and sold body parts of dead Palestinians. The Swedish Chancellor of Justice, Göran Lambertz, was asked to probe whether the report in the Aftonbladet tabloid last month amounted to inciting racial hatred and violated freedom of expression laws.

The TT news agency said the Chancellor of Justice had decided not to open a preliminary investigation into the case. The Chancellor of Justice, who was unavailable for comment on Saturday, is a government-appointed official who acts as an independent judicial watchdog and is the only prosecutor in Sweden who can take legal action in cases concerning freedom of speech.

Aftonbladet alleged in a story in August that Israeli soldiers had been involved in the illegal harvesting and trafficking of human organs. The claims sparked outrage in Israel and prompted senior figures in the Israeli government to demand that Sweden condemn the report.

What the Tundra Tabloid’s hat tipper was referring to, was the same Chancellor of Justice who exonerated a mosque some years ago, that made highly antisemitic tapes available to its congregation. The Tundra Tabloids reported on that situation as it developed.

In the book, “From behind the Humanitarian mask page 87″, Dr.Manfred Gerstenfeld interviewed former Israeli ambassador to Sweden, Zvi Mazel.

“The situation with respect to anti-Semitism in Sweden got even worse at the beginning of 2006. Göran Lambertz, the chancellor of justice—the government’s counselor on legal matters—discontinued an investigation of the Grand Mosque of Sweden. Cassettes sold there had a highly anti-Semitic content, calling for jihad and the killing of Jews.

The chancellor said these were part of the everyday occurrences in the conflict in the Middle East. “If one chooses the right context one can now call for the mass murder of Jews without any consequences. That is Swedish democracy, which also considers itself entitled to teach Israel morality.”

This is the same Chancellor of Justice who now claims that the Aftonbladet is not guilty of antisemitism, even though it published a series of articles by Donald Boström that promoted some of the worst antisemitic tropes that exist about Jews. 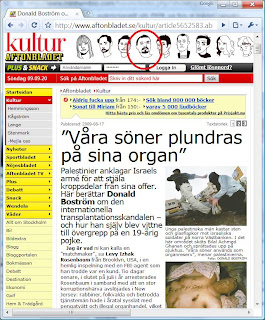 It’s also worth noting that one of the ring leaders of yesterday’s anti-Israel demonstration that was joyfully accompanied by the Neo-Fascist Left, was Mohamed Omar, an Islamist and ideologist of Nazi-Islamist cooperation and columnist for Swedish tabloid Aftonbladet.
So there is even a history of this Social Democrat Party (SDP) paper enlisting in its own ranks, an outspoken supporter for the Neo-Nazi/Islamofascit alliance. It’s a perfect marriage. Unlike the Sweden Democrats who are openly pro-Israel and anti-Fascist, the political status quo have created a cordon sanitaire against this political party. 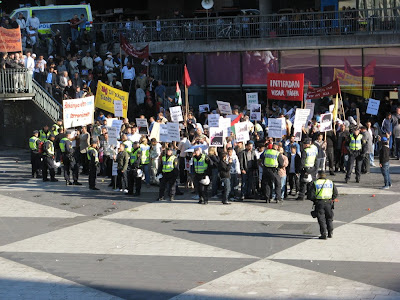 For the Swedish political elite, any party openly espousing pro-Israel sentiment are Nazis, but any of their own who mingle with actual Neo-Nazis….are just voicing anti-imperialist/colonialist sentiment, and that’s acceptable behaviour.  KGS 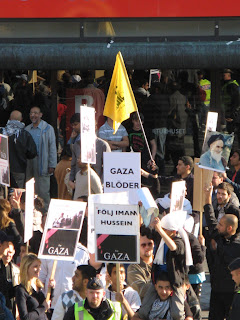 They are all Hezbollah! 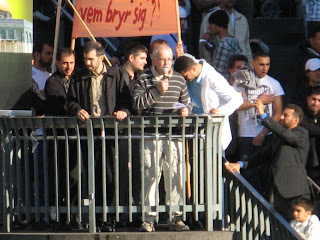