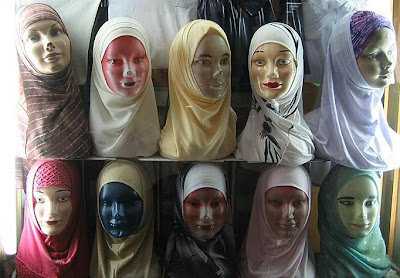 Which is their right to do so
This very well might be a poke and prod excersize by CAIR, the front group for Hamas in the United States. It’s very possible that the teenage Muslim girl sporting the hijab (Islamic political-religious head gear) was sent to the clothing store by CAIR to see whether they can get a court case going againt the clothing chain.
Since CAIR’s image has taken a beating after the Holy Land trial in Texas ended in a guilty verdict for all parties, and CAIR was named in the trial as an unidicted co-conspirator, the psuedo “civil rights” group, needs to regain its momentum, and what better way than to point at a “classic case” of discrimination against a Muslim, right? They need this case.
The clothing store needs to stand tough and not let anyone dictate how its staff will be dressed, this is another attempt to mandate how non-Muslims will behave in relations with Muslims. This is also a perfect time to project the real issue at stake here, the need to reject the use of the headscarf in public in its entirety. This is the Muslim Brotherhood’s agenda, to ensure Islam a special protection under the law, in order to fully subvert it later on.
Pamela Geller rights that “This should be good. Anyone with teenagers is quite familiar with the practically pornographic catalogs of Abercrombie and Fitch. Those soft porn fashion books are not allowed in my house. Left meets Islam. They will totally cave.”
That’s why CAIR most likely chose that magazine, which has a history of caving into lawsuits. It’s not rational for a devout Muslim to want to work at such a store, and her parnets to allow for it, that caters to such pandering to the flesh. Something is wrong here, and like I said, CAIR is on a fishing expedition to see if it can set a precedent in a court ruling, (like the flying Imams case) which will open the flood gates for even more intrusion of Islam into the public spehere of society. Mark my words. KGS
Teen at center of rights suit

A popular national chain of clothing stores is being sued by the U.S. Equal Employment Opportunity Commission for allegedly not hiring a Muslim Tulsa teenager because she wears a hijab, a religiously mandated head scarf. The EEOC filed the lawsuit Wednesday against Abercrombie & Fitch in U.S. District Court in Tulsa, citing the Civil Rights Act of 1964, modified in 1991, as the basis for the action.

The suit says that Samantha Elauf, 17, applied in June 2008 for a sales job at the Abercrombie Kids store in Woodland Hills Mall.A district manager allegedly told her that the hijab, which Elauf wears in observance of her religious beliefs, did not fit the store’s image.

“Defendant refused to hire Ms. Elauf because she wears a hijab, claiming that the wearing of headgear was prohibited by its Look Policy, and, further, failed to accommodate her religious beliefs by making an exception to the Look Policy,” the lawsuit states.

Elauf went to the Council on American-Islamic Relations-Oklahoma, which helped her file a complaint with the EEOC in Oklahoma City. The Civil Rights Act protects people from discrimination based upon religion in hiring and in the terms of their employment, an EEOC press release says. The law requires employers to reasonably accommodate the religious practices of an employee unless doing so would create an “undue hardship” for the employer.