Skip to content
Home
/
2009
/
September
/
14
/
Uncategorized
/
UK: Britons Turnout to Protest Demonstrators Supporting the Genocide of Israel in Trafalgar Square…….
Facebook
Twitter
Google+
LinkedIn
Pinterest
Quote of the day: “Mark Bergfeld, 22, said: ‘We came here because the English Defence League announced they would be marching.’We don’t need to grant freedom of speech to a Fascist organisation that tries to smash freedom of speech and all forms of democracy.” 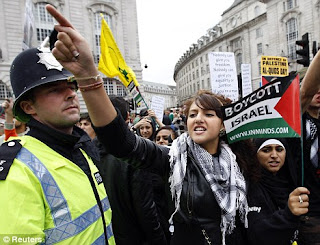 The keyeffeh: Symbol of Islamic fascism
Listen up folks, these “peaceful” protests against Israel for the past 27 years, are all about calling for the end of Israel, or in other words, calling for the genocide of the people of Israel. They parade with their signs dripping with anti-Semitic exhortations and libels, shouting death to Jews, while the media and the politicians passively look on.
The Tundra Tabloids rejects racism and racist rhetoric, and deplores the useage of any such language by people protesting Islamization, and if it is indeed happening, it should stop immediately.But what is most telling is the fact that these yearly  “protests”  calls for genocide of the Jewish people in the land of Israel, have been allowed to form up and march all these years, to the chagrin of the Left and the “human rights organizations”, The TT has yet to see any of these groups deplore the use of racist language and calls for genocide…..and yet they receive no attention from the media and from “certain British political analysts known to the Tundra Tabloids.
Far-Right supporters confront
pro-Palestinian marchers in London

Hundreds of people on a pro-Palestinian rally in London were met by a group of far-Right protesters holding Union Jacks as police held the two sides apart.

The supporters of the English Defence League turned up at the annual Al-Quds Day demonstration in Central London held to show support for Palestinians.

There was a heavy police presence as the procession was met with a small but vocal crowd at Piccadilly Circus.

A line of men, some wearing Millwall FC shirts, held up a union flag and shouted at the marchers.

The men held a banner declaring ‘March for England’.

Police kept the two sides apart as the procession went past and Scotland Yard said there had been no arrests and no disorder.